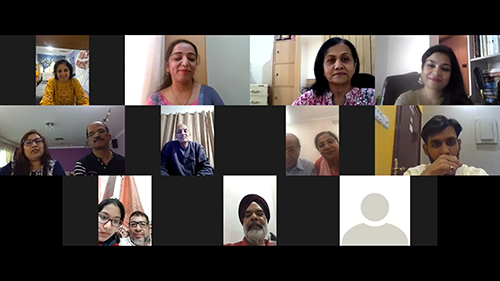 The Farewell season at Writers’ Forum continued with two more members leaving Kuwait for good. The Multilingual Forum of Indian poets/ writers residing in Kuwait met on the virtual platform of Zoom on the beautiful evening of Friday, 20th November. The cool pleasant evening was filled with the warmth of affection that the members demonstrated for their departing member and Publication Secretary Ms. Madhulika Mohta and Mr S. Qamar Minto.

Nazneen Ali, the General Secretary welcomed everyone to the meeting and invited Forum’s patron Mr. Ali Chougle to preside over the day’s proceeding while Ms. Madhulika Mohta was requested to be the Chief Guest of the evening.

The evening started with an emotional message by the President of the Forum Mrs. Maimuna Chougle who expressed her gratification for Madhulika’s efforts towards the success of the Forum’s activities. She also mentioned that in a very short period Madhuilka became an integral part of the Forum whose contribution, particularly towards the publication of the Multilingual Anthology Navratna II will always be cherished. She also praised the contribution of Mr. S. Qamar Minto for his continued support throughout his long association with the Forum.

While the members used different Indian languages viz. Hindi, Urdu, Sanskrit and Bengali to express their thoughts and feelings towards Madhulika, all of them had a common chord that resonated that Madhulika is the owner of unparalleled talent and dedication, a seasoned poet and anchor, and moreover a wonderful person. There were several emotional moments during the meeting when some members went extra miles in using beautiful similes and allegories that touched Madhulika so deeply that she was left spellbound and speechless and she, a voluble person otherwise, could barely say few words during her note as a Chief Guest.

In his Presidential note Mr. Ali Chougle expressed his good wishes for Madhulika and appreciated the bonding the members shared. He mentioned that Madhulika’s contribution to the Forum will always be remembered and nurtured.

The meeting concluded with Nazneen Ali expressing her gratitude to all the members for their presence and continued support.