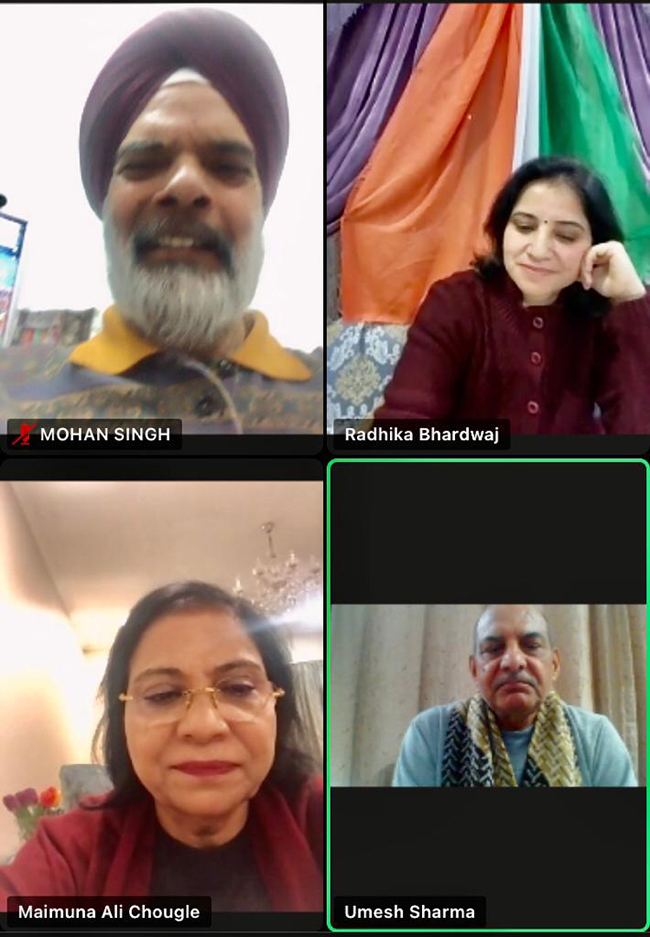 One nation, one vision, one identity. With this belief, the Writers' Forum Kuwait conducted its monthly meeting to celebrate India’s 72nd Republic Day.

The pandemic and resulting social distancing may have limited the WFK meetings to digital platform but it could not dampen the spirit and enthusiasm at all.

Mr. Aamir Diwan, filling-in in the absence of the General Secretary of the Forum Ms Nazneen Ali, welcomed everyone to the meeting by congratulating them on the eve of the Republic Day and reminding all about the value of our great democracy and constitution. The members fondly talked about the programs that WFK does every year to celebrate Republic Day and the grand Mushaira it did last year as well with ‘elan.

Mr. Aamir then proceeded to invite the President of the Forum Mrs. Maimuna Chougle to preside over the meeting and Mrs Anupama Chaturvedi, a hindi poetess, as the Chief Guest for the evening.

In the poetry session of the meeting, the members presented their poems that reflected deep love for the country, admiration for its constitution and respect for its unity in diversity. The members who recited their poems were Aamir Diwan, Dr (Mrs.) Radhika Guleri Bhardwaj, Umesh Sharma, Sunil Sonsi, Mrs. Kalpana Shah in hindi, Ammeruddin Ameer, Sayeed Nazar Kadpawi & Mrs Nazneen Ali in Urdu and Mohan Singh in English. Other members who attended the meeting were Sabir Omer & Biswa Ranjan.

In her speech as chief guest, Mrs Anupama Chaturvedi spoke eloquently about our great Republic and reminded all about the sacrifices that the country's brave freedom fighters and ancestors had done to build this beautiful nation. She went on to present her poem in hindi and reflected succinctly upon the meeting and poems recited by the members.

Mrs. Maimuna Chougle, while delivering her presidential remarks, congratulated and thanked every member for attending this special meeting dedicated to the Republic Day and reminisced about the programs and Mushayeras that Writers' Forum is so proud to organize on the Republic Day and Independence Day every year. An accomplished writer and critic that she is, she read a moving critique about one of the most celebrated and prolific hindi / urdu story and novel writer Munshi Premchand.

The meeting ended with Mr. Aamir Diwan expressing thanks to all the members for their presence.