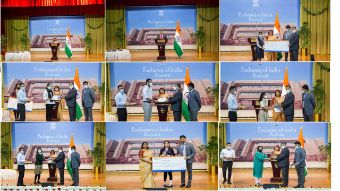 The 7 Sastra Prathibha title winners and JC Bose Sastra Puraskar winning school, Bharatiya Vidya Bhavan Kuwait, were felicitated at the Indian Embassy premises earlier by H. E., the Indian Ambassador. A video on the prize distribution ceremony at Indian Embassy was played. The 121 outstanding performers were honoured at the online Gala function. Sastra Prathhibas for the year were given opportunity to interact personally with the distinguised guest from India, Dr. Laxman Rathore, at an exclusive online “Meet the Scientist” program. Students from 22 Indian schools in Kuwait participated in the Sastra Prathibha Contest this year conducted online.

Dr. Laxman Singh Rathore delivered his keynote address on the topic “India’s advancements in weather prediction and its role in Middle East”, which threw light on weather predcition capacity of India and how it can be beneficial for everyone. Dr. Hassan emphasized on the need of accurate and efficient weather prediction system for the integral development of any nation including its economic and social growth. He also reminded the students the importance of asking questions continously to excel in the field of science. Indian scienists working in Kuwait Institute for Scientific Research (KISR) also attended the function.

Later SIF Kuwait initiated a discussion with Dr. Rathore, Dr. Hassan and Mr. Yasser along with the Indian scientisist in KISR on the possibilities of having a knowledge share platform under the agies of SIF Kuwait by means of seminars and workshops with active participation from both Indian and Kuwaiti counterparts identifying key areas and subjects of interest.