Is there so much behind Camel..?

-by Eng. P.Senthil Kumar with Hari 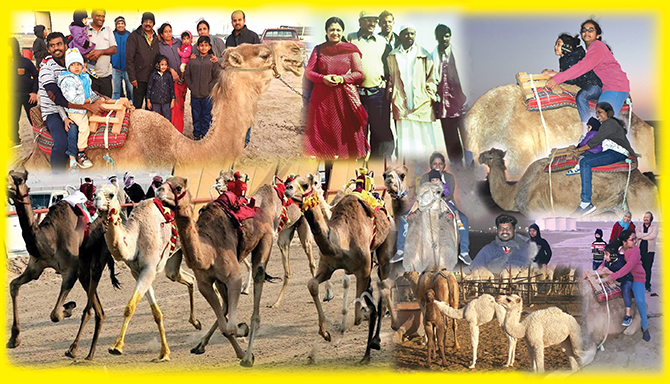 Kuwait has never inclined to be a touristic destination; also, there is no such elaborate arrangements conceived right from the beginning.

Kuwait is a constitutional sovereign state with a semi-democratic political system. Kuwait has a high-income economy backed by the world's sixth largest oil reserves. The Kuwaiti dinar is the highest valued currency in the world. According to the World Bank, the country has the fourth highest per capita income.
Oil reserves were discovered in commercial quantities in 1938. In 1946, crude oil was exported for the first time. From 1946 to 1982, the country underwent large-scale modernization. In the 1980s, Kuwait experienced a period of geopolitical instability and an economic crisis following the stock market crash. In 1990, Kuwait was invaded, and later annexed, by Saddam's Iraq. The Iraqi occupation of Kuwait came to an end in 1991 after military intervention by a military coalition led by the United States. 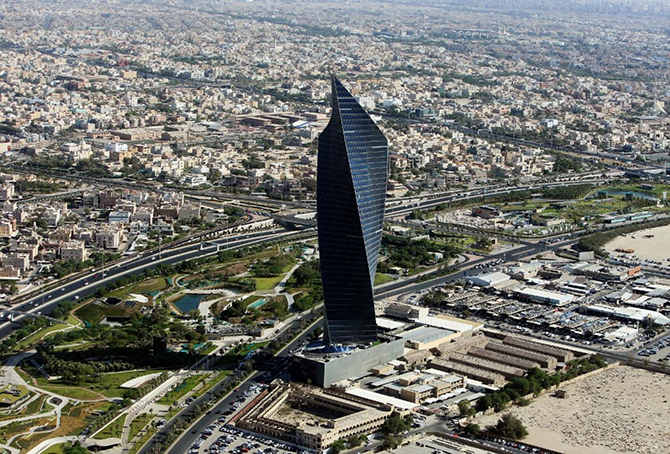 Kuwait has an extensive and modern network of highways. Roadways extended 5,749 km, of which 4,887 km is paved. There are more than two million passenger cars, and 500,000 commercial taxis, buses, and trucks in use. On major highways the maximum speed is 120 km/h. Since there is no railway system in the country, all travel by automobiles. There is no dearth of high-speed roads, several spacious shopping malls and multi-cuisine restaurants. 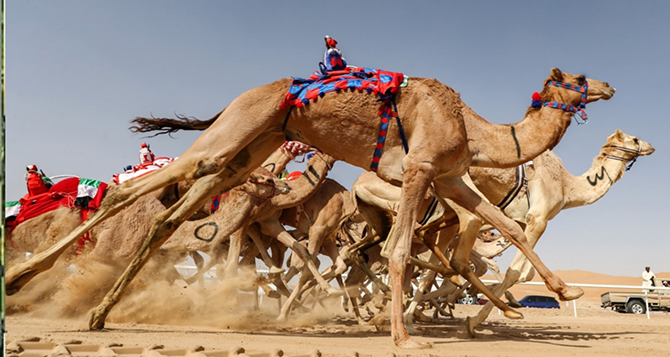 Above all, there is one interesting thing in Kuwait……That’s Camel Farm!!
When you live in Kuwait for a long time you are always searching for something new to do. During the winter months we pack up the family and go to the camel farms. It's nice for the kids to get the chance to be up close and personal with the camels.
Camel Farm! It was the best picnic place to go and enjoy with the group. The farm is set up on a one-hour journey from the city, almost in the Iraq border, where the fence was set up and you will find more than 100 camels that are small and big. Baby camels are born without humps. They are however able to run within hours of birth. They call to their mothers with a lamb-like “baa” sound. Mother and child camel pairings are extremely close, staying together for several years. 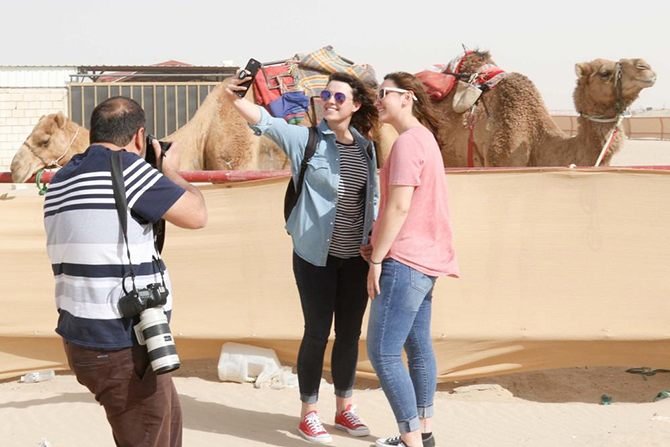 Arabian camels only have one hump. Camels have two rows of thick eyelashes to protect their eyes from the desert dust. They are also able to close their nostrils and lips to keep out the dust. Camels’ ears are small and hairy. However, their sense of hearing is also extremely strong.
The amount of water a camel drinks on a day-to-day basis can vary greatly, as they drink to replace only the fluid they’ve lost. A thirsty camel can drink up to 135 liters in one sitting! In Arab cultures the camel symbolises patience, tolerance and endurance. Camels have played such an important role in Arabian culture that there are over 160 words for ‘camel’ in the Arabic language. 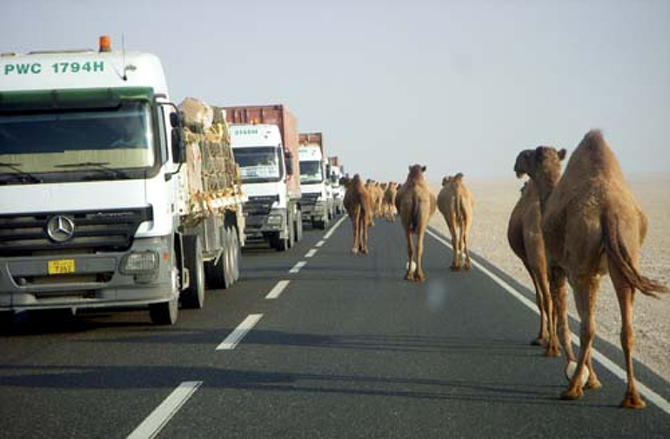 To maintain these camels, that our hometown people are managing in the desert with the sun heat and dust; also, cold during winter. The special guests who come to Kuwait from India visit this camel farm without fail and in particular, Former Foreign Affairs Minister Salman Kurshit, Mastero Ilayaraja, film Directors Bharatiraja, Baghyaraj, Ex. Central Minsiter Thirunavukkarrasar and so on.
It is strange to see these camels are very quiet and stay within the 4 feet high fence which can collapse even if we touch, but, if the camel stretches its legs and kick, it is too strong to crush even the heavy duty cars and trucks!!!!!!! 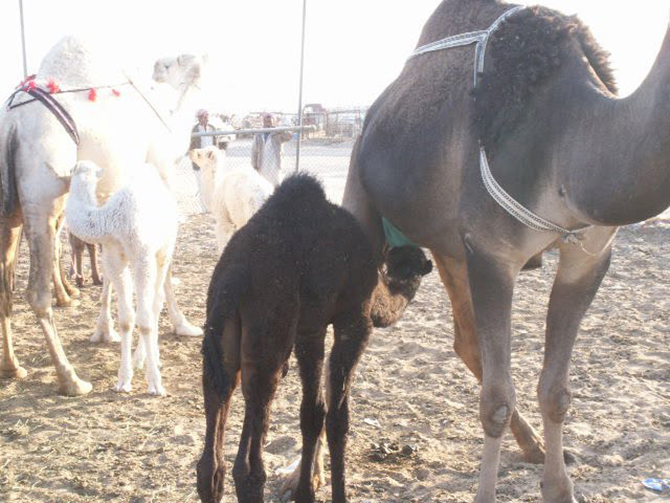 How we give bananas to the elephants, here the people who go to see the camels will be glad to give Kubuz (the local bread), grass and bun. It is an eye-blind sight to watch them eat! But its favorite food is the cactus with thorns! The camel with its thick, rubber-like lips eats it with style.
The people who look at the camels will have a desire to ride on it with some fear too! It would be possible if we reach the camel keeper with a small tip !!!! In accordance with the instructions of the camel keeper, the camel folds its legs to sit on the ground so that the rider can get on the camel and quickly it gets up and walks brisk and elegant though we feel like falling down from the “desert ship”. This is a rare site to watch when the camel walks!
The gentle walk and jump! of the camel is elegant as it goes on the sand heaps with ups and downs of the desert; it is able to do because of the special joints in its legs. In general, if the horse is observed, the front right leg will be taken first and then left leg on the back, but for the camels, they move both legs on the right and then both left legs together makes it to swing like using boat paddle and hence camel is called as “Desert Ship”. 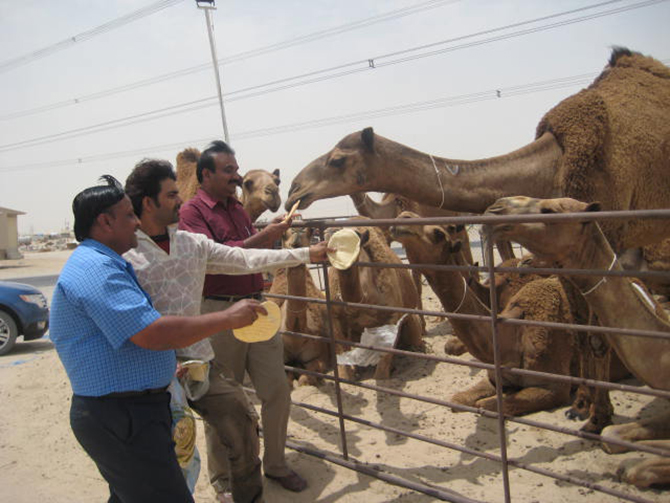 Additional “catchy” camel information:
Quick Facts CAMEL
• Type: Mammal
• Diet: Predominantly herbivorous
• Life span: Up to 45 years
• Size: 1.5-2.1 m tall, males larger than females
• Weight: 400-600 kg, males heavier than females
• Habitat: Deserts, mountains and other arid regions
• Range: Africa and the Middle-East, and Asia
• Scientific name: Camelus
• Typically, female camels are used for races as male don’t obey the orders.
• Camels are used for its milk and meat and carrying loads; and in countries like India, they use in carts too.
• Camels can see all around 360 degrees without turning its head which is so special.
• Camel is unique in the living organisms of the world. It is a slightly more different creature in physique and activities.

Desert Ship:
In the olden days, people had to sell the dates by passing through hundreds miles of dry desert, which had no water to drink, and to buy essential items for the people to live using this “desert ship”.
It can carry 200 kg of weight even in severe drought-day and walk 40-50 km daily. If there is water and food, it may be possible to have more mileage!

The most severe heat- the extreme cold- the bitter sand-dust- the camel withstands all these harsh environments and can travel with no water for months together. This is a special creature made by the God to manage nature’s challenges…… The pinnacle of Wonder! 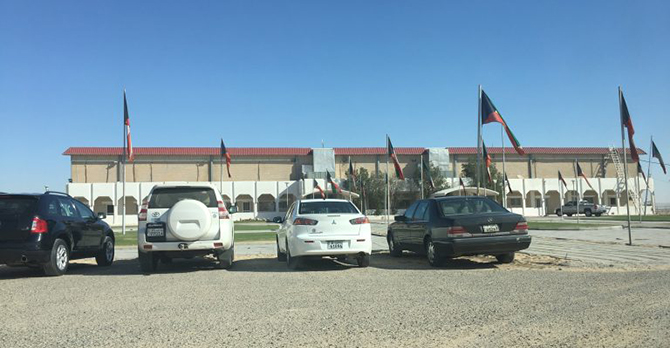 The camel’s skin and hair are so well designed to take care of the extreme heat and the lowest cold. Also, it adjusts its body temperature between 93°F-107°F to withstand these adverse temperatures; we humans maintain (97°F - 99°F) temperature and if we get 100°F we run to look for the doctors.
Sand is the biggest challenge in the desert as we get frequent sand storms and dust gets all over! The camel will cover its nose by its own nose and not by hand!!!! like how the eyes are closed with the eyelids. To protect the ears, it has got lot of hair in and out of the ears. For eyelids, it has like the car's wiper.
What is the secret of living without drinking water? Camels can stay without water for months together. If available, they can suck 100-150 liters in 5-10 minutes. 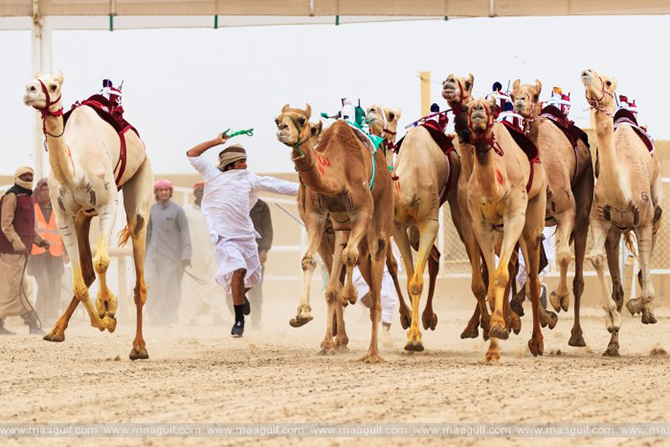 The camel’s stomach has three segments. Between the first two stomachs’ membranes they store the water. The next it stores in the blood cells (RBC). The egg like red cells’ membrane can elongate 240% in shape. We humans do not have this system. The muscle in the back is hump and the water is converted into fat and stored up to 45 kg. The hump is hanging on one side when it is empty.
As the petrol tank in the motor vehicles, the stomach of the camel stores the water primarily and the hump as the reserve tank. During the absence of food or water, due to its known metabolic changes it can convert the fat into water and energy. There are two types of camels with one hump or two humps. The two hump camels are more powerful.
If the water content in the human body goes even 12% less, they will die. Man has to discharge 16 ml of water in 1 liter of breath. Camel can still walk for a long distance even if the water content goes 40% less. The camel excretes only 60% of the water in the urine due to its special kidneys and liver converts urea salt into protein. Also, only 1 litre of water is excreted in the dung, whereas the cow excretes at least 20 litres of water.

Camels do not drain the water from the breath. But it can sniff the water several miles away from it. The body of camels does not usually release sweat and it saves water. Because camels save water and not wasting it, they can walk with loads for 6-10 days without water, and if they live in a tent, it can survive for months. Less food is enough! 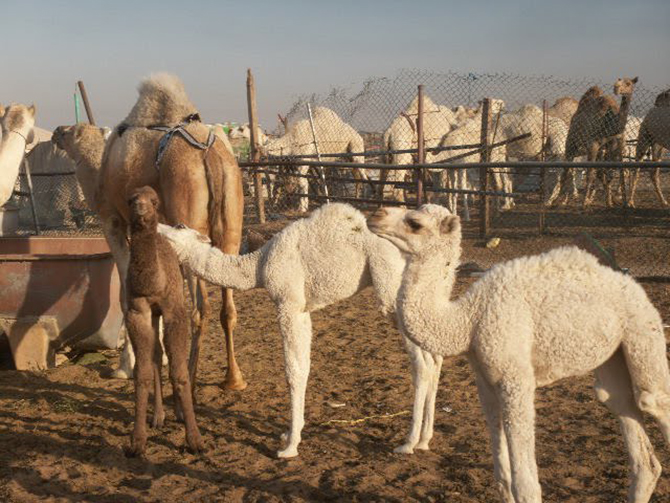 Camel’s milk contains a large number of proteins and minerals-three times the amount of vitamin C than the cow and good for masculine. Though it is water drought animal, the minerals, fats and vitamins in the milk is very high and gives much strength. For those who are allergic to milk, this milk is a boon. Since this helps masculine strength, whoever visits the farm tries to taste the milk thinking of drum stick ! It tastes like cream but if you drink too much you will need a bathroom immediately. 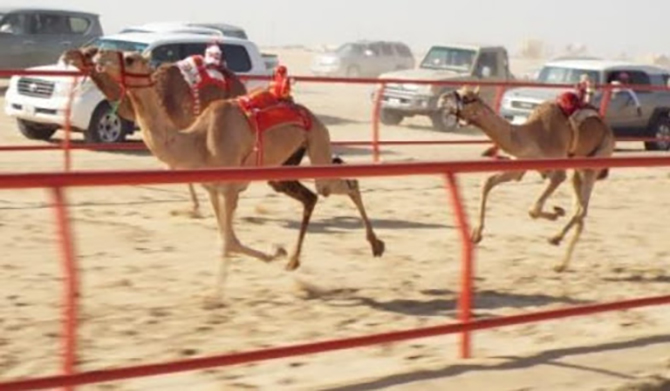 The Camel race competition:
It is unique to Kuwait, which takes place on Saturdays from November to April, and is one of the traditional games of the Arab people. In the Gulf Countries Dubai-Qatar-Saudi-Oman-Bahrain, this camel race is more attractive and more expensive prizes than the F1 car race in Dubai.

Even to walk on the Quick sand itself is difficult, but... the camels run at 60 km speed of the fire! The robot is the Jackie! The camel owners push the buttons from far and the beginning of the countdown starts! The owners operate the robots to whip the camels and camels pick up the speeds!

Camel meat:
They sell camels out of the auction. It is heartening to see the camel’s legs are tied and using cranes they are taken on the trucks to transport out. The camel meat is the most important thing in the Kuwaiti weddings. The number of the camel that has been shed for the weddings decides the status ! Camel is given as wedding gift too.

The common camels are valued at-least 2 -5 lakhs! The camels used for the races are in Crores! A camel worth Rs. 406 crores (200 million Saudi Riyal) has gained a high value in the world and has been featured in the Guinness Book. 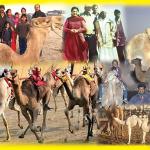 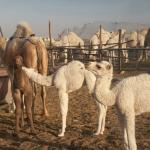 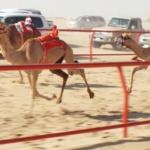 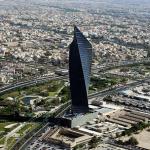 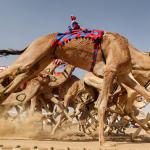 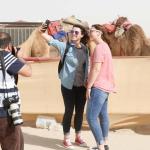 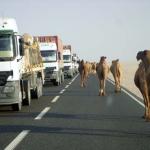 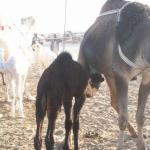 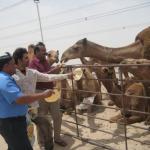 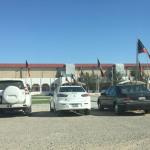 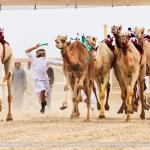 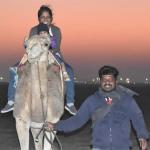 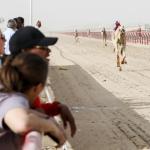 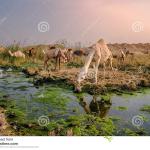 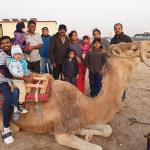 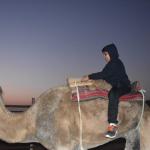 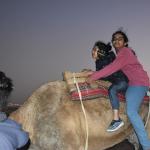 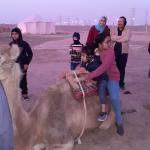