Achievers have to come together in shaping mother Bharat, each of us have to influence, and contribute 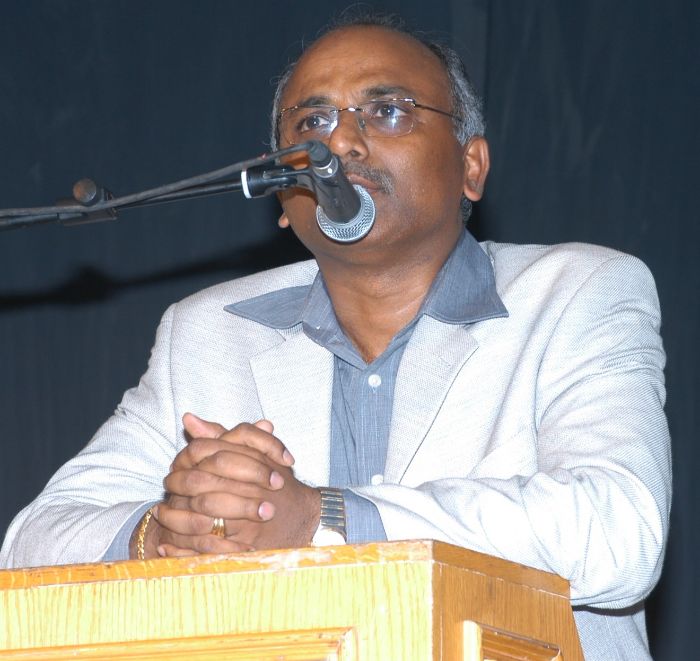 All Human by nature have an obligation, accomplishing the same is an art, individual creation has its own style of functioning and their actions have unique foot print by their inherent knowledge, strength of memory, attitude assimilated with proactive sense to achieve.  Eng. N. Lakshminarayanan (CEG86) believes and patronizes these aspects, praises others on similar parameters.

Indian Frontliners (IFL) and similar, cricketing in the hot desert, traveling all around the 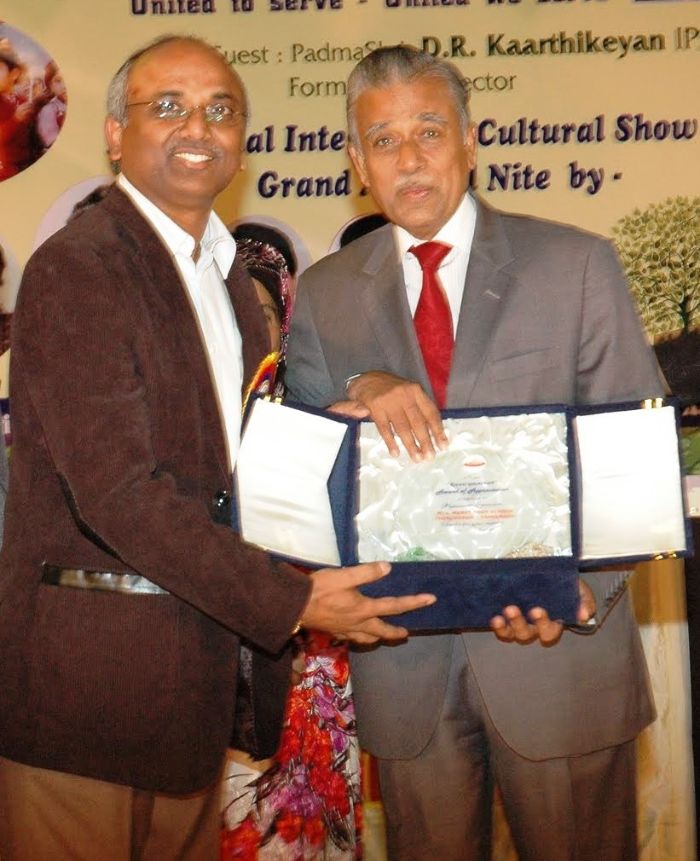 globe have all provided several spheres of experience which added essence and flavor to a successful career for Laks.

Born in a large educated family, lot of care, an environment of love, fun and duty are all divine benedictions of early life. In simple words if asked, “what I am now is the deep blessing of parents, family and well-wishers!” a set of words that he is proud.

An Individual’s responsibility is to be helpful to people around, be accommodative to planet earth and get the feeling of pleasure in the smile of the needy, the benchmark prevalent from his early years probably due to influence of his father an well-known Joint Director of Employment from pre-independent India to developing Tamilnadu.

Early schooling in ICSE, moving to state board education of Tamilnadu were path of emotional experience that sculptured future goal.   Guindy Engineering College (CEG) Chennai and later employee of SPIC set his career in the field of Oil & Gas and 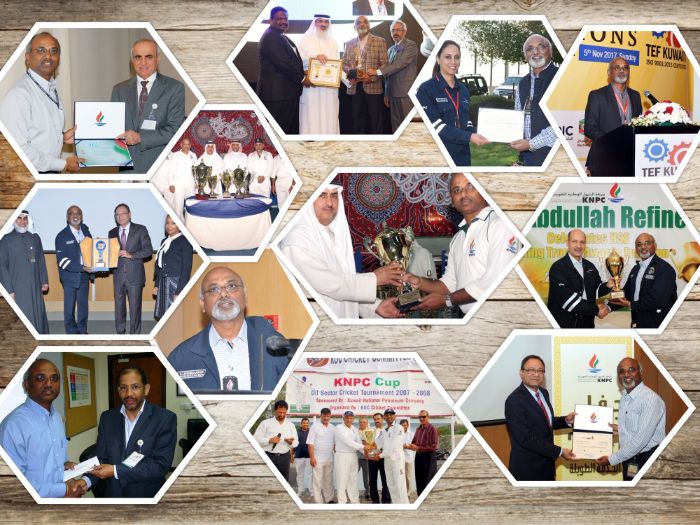 Specialists (TPL) in Kuwait National Petroleum Company were associated achievement by hard effort and cumulative positive vibes that were showered on him over the years - he always says and believes!

Not all efforts   have its true benefits but sincere adorability and warmth of co-human has great influence on one’s final Outcome is a theory that everybody of Today need to Learn. It is important, this concept of humane lifestyle is taught to youth of today to ensure betterment a strong prescription of peace and good health.

Today, unfortunate trend of materialistic pleasures and care for thyself, mind to service and caring for humanity need to be an essential component of teaching and learning.  This factor should be of influence and practice by society for community well built up.

Laks a chennaiate in all aspects has his deep roots at Tanjore and its associate districts. In December 2015 when Chennai was reeling with floods, he was on the streets of Saidapet, CIT colony, Jafferkanpet, Vandalor outskirts distributing several loads of home needs for the people in distress. 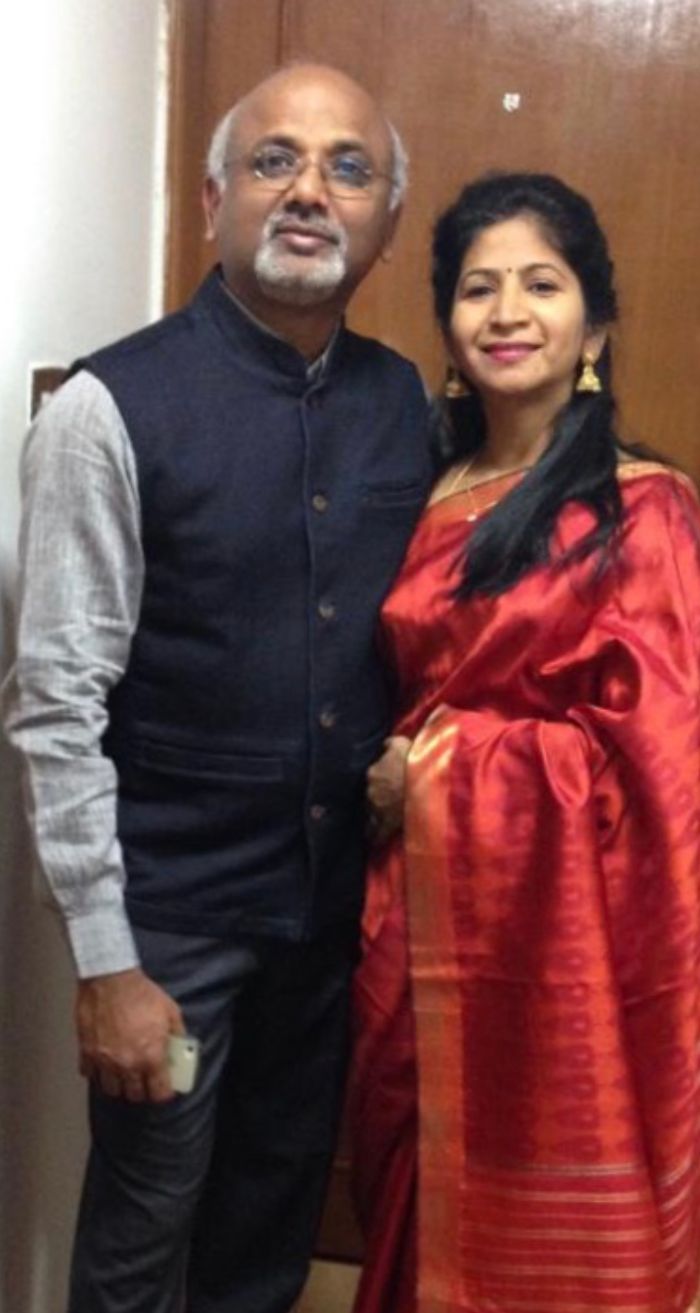 Hearing of Grandparents keen involvement in freedom struggle and father senior gazette officer services played role in molding the character and the path towards his likes and dislikes. The ambiance @ CEG in his sharp memory, expresses heap of praise for the lecturers, professors, and various staff who had been the visible ladder for growth & prosperous career.

He was a student leader from school, also continued in college and tuned his attitude until date to take up responsibility and stand accountable in any groups.

He always states, SPIC was a seed of growth and a high learning experience after a total societal change from the busy metropolitan city life at Chennai to a small town of Tuticorin, Tamilnadu. Engineering management course and the commendable activity 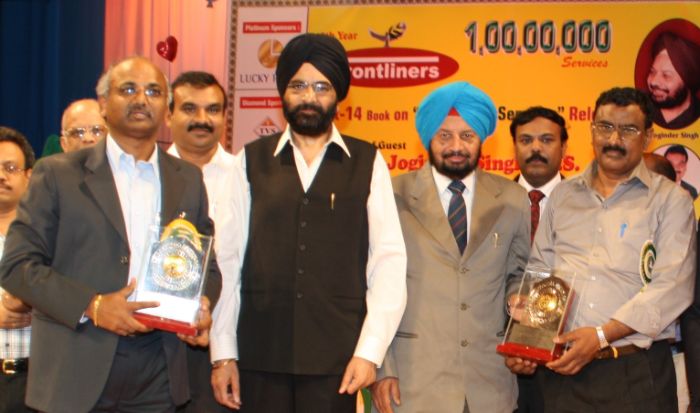 it played to impart extensive training on the employee is a specific goal changer for budding engineers.

Later part of 80’s and early 90’s Indian economy on a tight rope, saving of every USD was corporate goals, Laks started study and reengineering of various Imported component in fertilizer sectors.

His organization nominated him to be member of South Indian Import substitution Team, leading fertilizer companies had its members. His phenomenal efforts still stand testimony as several machinery components in the tuticorin plant have their Indian manufacturer for their original design at UK, Japan & elsewhere.

The motivation and the encouragement were catalytic impetus for several of achievement in this specific sector, which augmented his technical knowledge by visiting several manufacturing centers all over India and abroad. Stint at Mitsubishi Engineering Hiroshima japan in 92 was a turning point and interest towards turbomachinery enhanced. 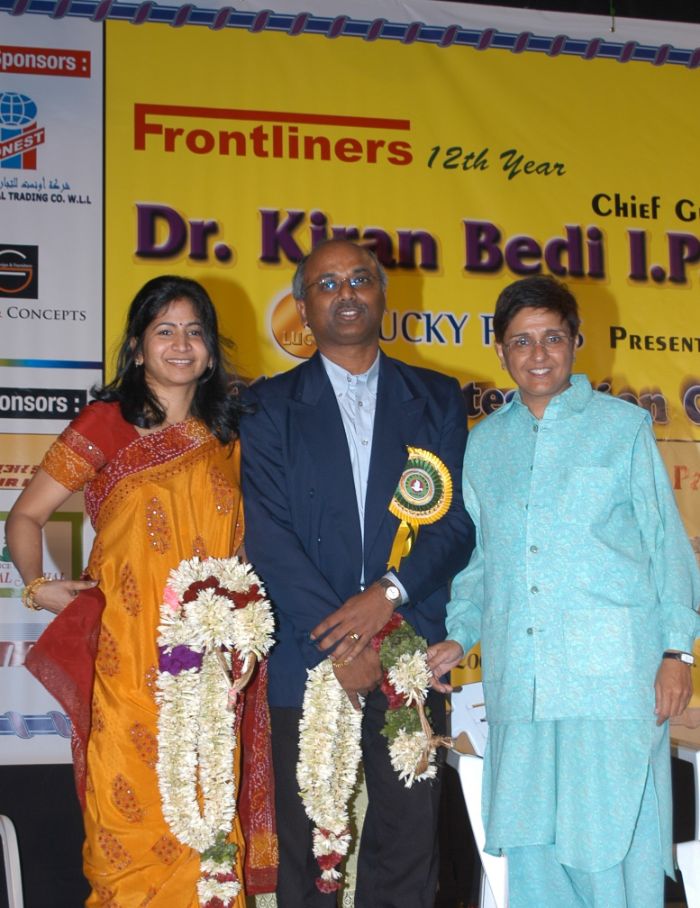 Sports and work were parallels and this continued even at Kuwait where he moved in 1994 as an Engineer in Kuwait national Petroleum Company a state owned Refinery.

As General Secretary of Tamilnadu Engineers Forum- TEF Kuwait in 2002 – 2004   was instrumental for it growth and popularity and in later years was its President for two separate Terms. Recognized at work, Yr2008 he raised to be the first Specialist (TPL) of Rotating Equipment.

Laks always had his eyes on giving back to motherland, started a School in the small town of Senthamangalam, Tiruvarur district Tamilnadu along with few well-wishers in 2006. MERIT High School later grew to be MERIT 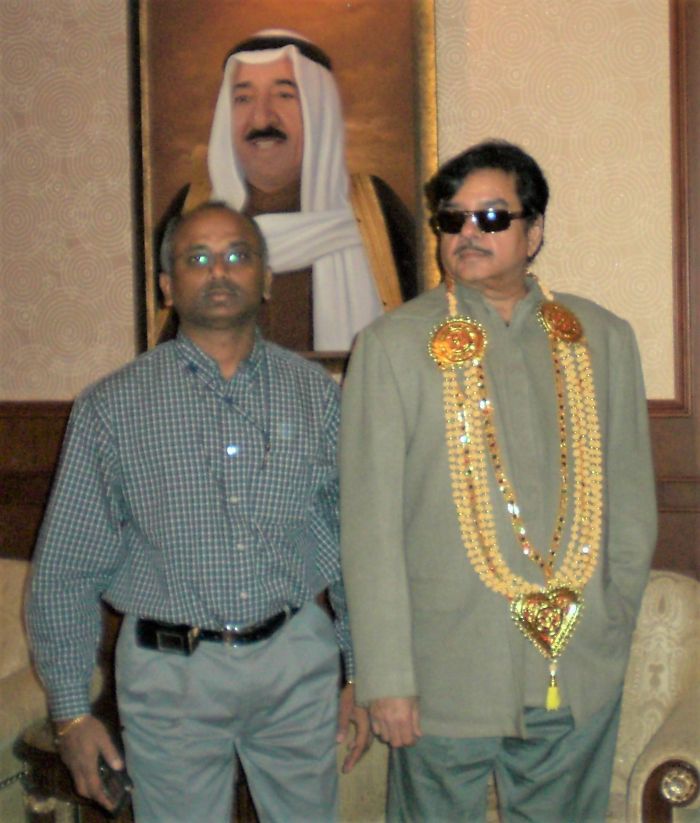 Higher Secondary School in the years to come and has its own feather of glory for its students have been rank holders in the district and the school has marked stature for disciple and societal respect.

Noting the importance of elderly lectures for the youth, periodically addresses the school students to motivate and augment their skills. Merit was one of the early school to introduce Yoga as curriculum in 2015/16. The school continues to be servicing the knowledge quest of tiruvarur and various extra activities are encouraged for student betterment.

Marked area of Laks interest is cultivation and farming, working on his lands at Ayyampettai, Tanjore district coconut farm, small forest of timber trees and Casuarina garden with over 4000 samplings gives him lot of smile and he 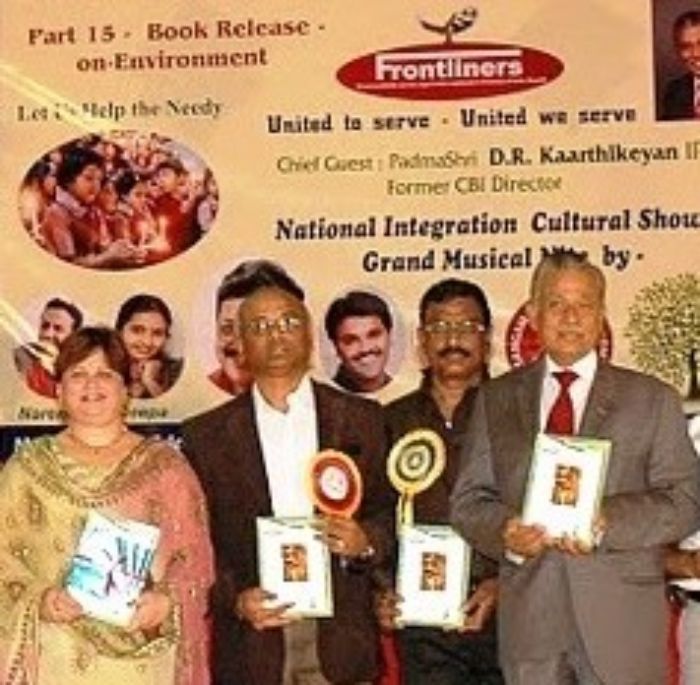 recollects with awesome pleasure the sound of the birds, dancing of the peacocks, occasional visit of predators.

Furthering this passion, he is developing fruit bearing trees garden and special grade of coconut samplings on an expansion scheme as a nice pastime activity. He always futures that this shall be the special assignment in retired life.

Farming made as a subject of study at school and children taught about rivers and conservation are close to heart ideas that he possess and looks for opportunity for influencing the Masses. Always positive in trait and looking at any condition as an extension of challenges for devising newer solution!

Sathiya Lakshminarayanan a chemistry graduate of Tanjore College from a highly reputed marasdhar family an encouraging partner stroking motivation due her special attitude of extended patience and  sense to explore with no fear.

She is a pillar of strength and was elemental in ensuring the extra needs of both son Varunchand & daughter Suvetta in their growing years.

She was driving through various streets of Kuwait for the children, as laks was more engrossed with service activities after work and cricket for KNPC and club during weekends. Varun enjoying his work at Vancouver and Suvetta in the early architect career at Chennai adore their parents for developing their special skills in their respective path for sustenance. 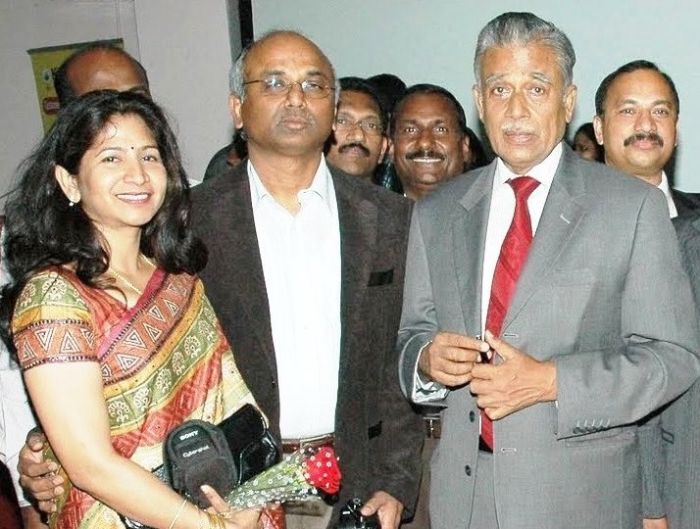 As the discussion extends he spells out salient points, which are worth for records and deliberation  such as …….

Training of youth from school, college and in institution is a very critical task that challenges the Nation.

Citizen of today have their role in shaping the youth for tomorrow by being part of this large training service. Developing nations owes lot of time, energy and assets in the area of Research for this is the specific strength we professional have our duty to perform.

Achievers from various fields have to come together in shaping mother Bharat, each of us have to influence, and contribute our energy & time. What have we contributed to motherland?? - Be a behavior question engraved in the minds of all.

Nation is built by the small contributes that orients, designs, influence the mind of the youth. These specifies are the need of the hours and let each of us lend our hand!

--life is a song enjoy singing it in right tune--- 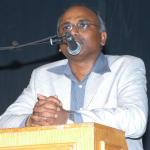 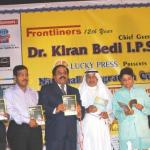 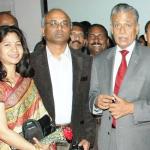 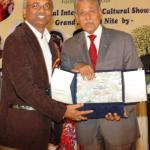 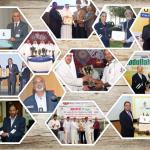 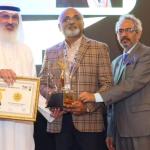 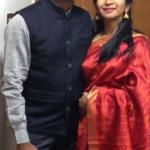 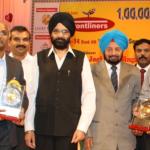 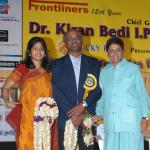 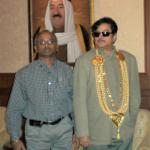 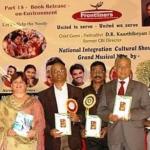 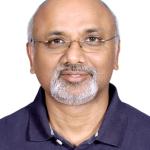