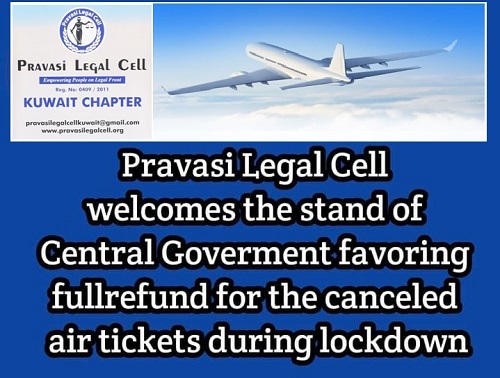 The Central Government vide its affidavit filed in  the airline ticket refund Public InterestLitigation (PIL) filed by Pravasi Legal Cell, has made its stand clear that the full refund should be provided for tickets cancelled due to lockdown imposed in the country

It is pertinent to mention that Pravasi Legal Cell vide the aforementioned PIL had questioned the decision of the airline companies of not refunding full air ticket fare of those domestic and international flights which got cancelled due to lockdown.The Hon’ble Supreme Court after issuing notice to Central Government and airline companies in the matter, directed the central government and airline companies to engage in deliberations to resolve the issue in a n amicable manner. The clear stand of the Central Government has come in the wake of discussion held with the airline companies.The direction of the Central Government to refund the full fare is time bound. The airline companies must refund the full air fare amount with 15 days from now. The affidavit also makes it clear that if an airline is unable to refund the full airfare to the passenger, then the amount should be provided to the passenger as credit shell, which the passenger can avail till March 31,2021. Furthermore, if a passenger is unable to book ticket by 31st March 2021, then the airline company must refund the airfare at 0.75% interest. The Central government vide its counter affidavit submits that the instant proposal should be made applicable to not just tickets of domestic and international flights of India but also to foreign flights that ply to India.

It is also relevant to mention that the instant airline PIL matter will be taken up for hearing again by Supreme Court this coming Wednesday i.e. 09.09.2020.