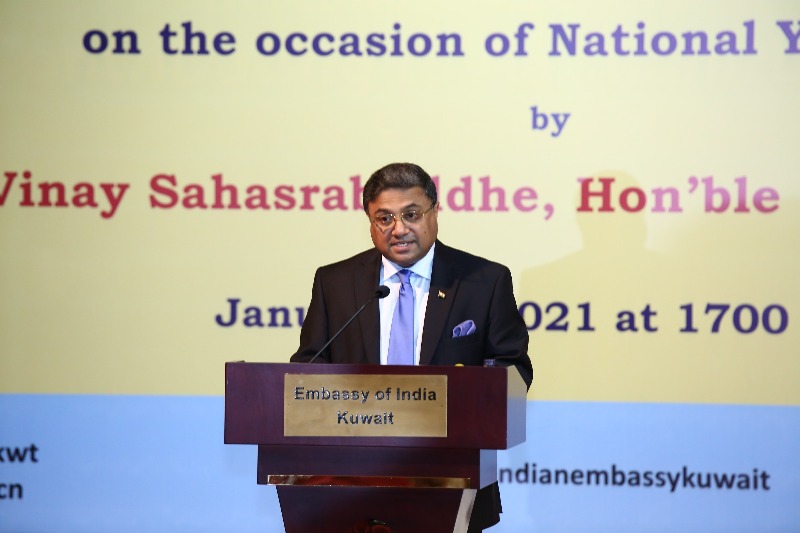 Esteemed Guests from Kuwait and India,

A very Good Evening to all of you.

Let me begin by wishing you all, a very happy and healthy New Year 2021 and also Greetings of National Youth Day!

It gives me a great pleasure to address you all today, and welcome you all to today’s event.

I would like to begin my remarks by thanking His Highness Sheikh Nawaf Al-Ahmed Al-Jaber Al-Sabah, the Amir of the State of Kuwait, and His Highness Sheikh Mishaal Al-Ahmed Al-Jaber Al-Sabah, the Crown Prince of the State of Kuwait, for hosting the large Indian community in Kuwait and for their leadership in strengthening the bilateral relations between our two friendly countries. I would also like to express my gratitude to the Government and the people of Kuwait for the personal care and humanitarian support extended to the Indian community during the COVID-19 pandemic.

The relationship between India and Kuwait is historic and deep rooted by civilizational affinities tracing back to centuries. At the heart of this relationship are the people-to-people exchanges which have sustained and nurtured this close relationship over centuries. These vibrant exchanges have transformed the relationship substantially into a mutually beneficial long standing dynamic partnership.

Our Community in Kuwait, of around one million brothers and sisters, are widely respected and loved by all sections of the society in Kuwait. The admiration and affection garnered by our Community is not a mere coincidence, rather it is the result of the hard work put in by generations of our people living and working here. It is a testimony to our values and ethos of peaceful and harmonious coexistence that we as Indians stand for.

I am also happy to highlight the symbiosis between the Embassy and the community that exist today. The Embassy works very closely with the community; to support those in distress and also collectively celebrate India in Kuwait. Together we celebrate every important occasion, every festival, every national day of importance; and collectively strive for strengthening of relations between India and Kuwait. Today’s event is also part of this endeavor to celebrate India, celebrate the life and contribution of Swami Vivekananda, who is an embodiment of the Indianness in the modern world.

I thank Hon’ble President of ICCR, Dr. Vinay Sahasrabuddhe, for joining us today to deliver the first Swami Vivekananda Address and also install the portrait of Swami Vivekananda in Kuwait. In the last few years, under the visionary leadership of its dynamic President, ICCR has transformed itself as the most important forum in promoting Indian culture abroad and in building cultural partnership with the world.  Sir, on behalf of the vibrant Indian community in Kuwait and on behalf of the Indian Cultural Network (ICN) in Kuwait, I welcome you to this celebrations.

The year 2021-22, marks the 60th anniversary of establishment of diplomatic relations between our two countries and the Embassy is looking to organize a series of events as part of these celebrations. We also look forward to celebrating the 75th anniversary of our Independence and 125th birth anniversary of Netaji Subash Chandra Bose. The Embassy, with the support of ICCR, looks forward to work closely with all the Indian Community Associations in Kuwait and our partners to celebrate these important anniversaries. 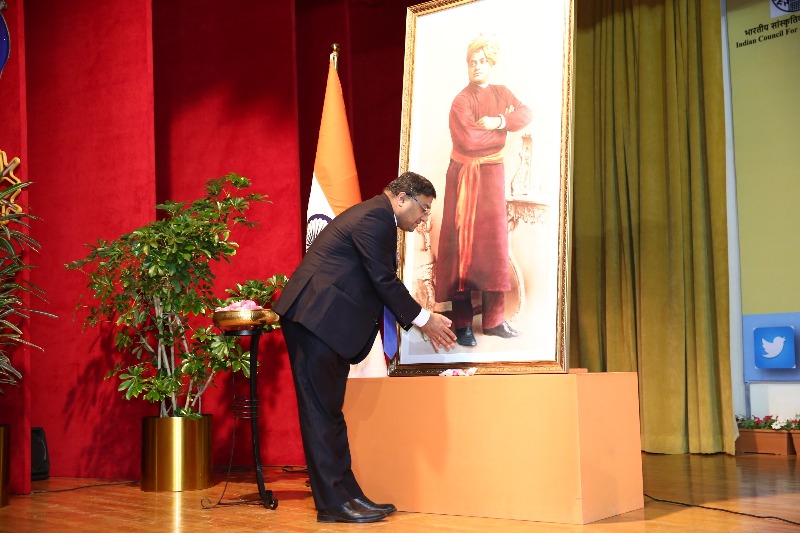 Coming to today’s event, where we commemorate not just an individual but a phenomenon, who cannot be described in just mere words. Swami Vivekananda was a colossal figure in our nation’s history who played a leading role in bringing about a new awakening in India. I recall how he inspired my generation when as school children we used to recite his powerful words ‘Arise, awake and stop not till the goal is reached’. Swami Vivekananda emphasised on the ideals of service and renunciation. His belief in Yuva Shakti was unwavering; which found expression in his iconic saying 'give me 100 believing youth and I shall transform India'. Belief, here, means belief in oneself.

Today morning in his address to the 2nd National Youth Parliament Festival Hon’ble Prime Minister Shri Narendra Modi said, and I quote: “Our freedom fighters were influenced by Swami Vivekananda. His works have always been effective in instilling nationalism in the youth. Time passed, the country became independent, but we still see Swamiji's influence today. What he said about spirituality, nationalism & nation building, his thoughts about जनसेवा & जगसेवा flow within us with the same intensity:” Unquote.

As a young student and later as a diplomat I was fortunate to visit many places associated with the life of Swamiji. The Vivekananda memorial in Kanyakumari, the southernmost point of the Indian peninsula where the Arabian Sea, Indian Ocean and the Bay of Bengal meet, where Swamiji is believed to have attained his enlightenment.  His ancestral home in Kolkata. The site in Chicago where he delivered the historic 1893 address, which is still hailed as the most memorable speech that introduced Indianness to the Western world. I recall, one of the first places in Switzerland that I visited as India’s Ambassador was Saas Fee to pay homage to Swami Vivekananda who travelled to that beautiful town in the Alps Mountain in 1896, where a memorial and a statue of Swamiji stand. One felt so happy to see how Indians and foreigners visit Saas Fee in large numbers to pay homage to him, and to join the campaign ‘Connecting Himalayas with Alps’. And today, we are joining hands in Kuwait to celebrate his birth anniversary and celebrating our Indianness.

I am happy that we are unveiling this portrait of Swamiji today at the Embassy. His teachings will continue to influence the lives of every Indian, whether in India or abroad. This portrait will serve as a reminder to us and also to all visitors to our Mission on the contributions of Swamiji who energized the young people, made them aware and unleashed their creative energies. I am happy that this would also inspire the students who visit the Embassy as part of our soon to be launched ‘Embassy familiarization visit’ for children from our 23 Indian schools in Kuwait. It will be a reminder for us all on the Indianness that Swamiji embodied which continues to guide and inspire us and continue to inspire millions of our young brothers and sisters. 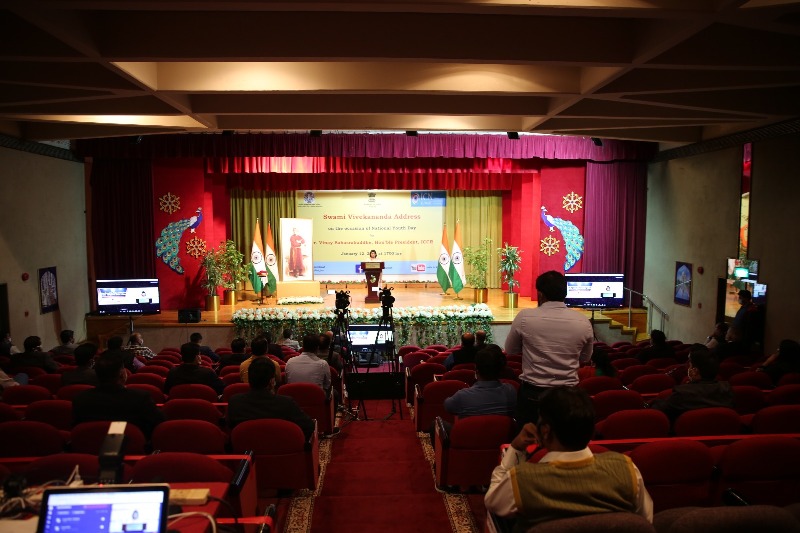 Let me conclude by quoting from Hon’ble Prime Minister’s address today: “It was Swami Ji who said that the fearless, bold, clean-hearted, courageous & aspirational youth is the foundation on which the future of the nation is built. He always believed on youth and youth power”. Unquote.

I thank you all for your overwhelming participation today.

I now request Hon’ble President of ICCR Dr. Vinay Sahasrabuddhe to deliver the first ‘Swami Vivekananda Address’ and also declare the portrait of Swamiji as unveiled. 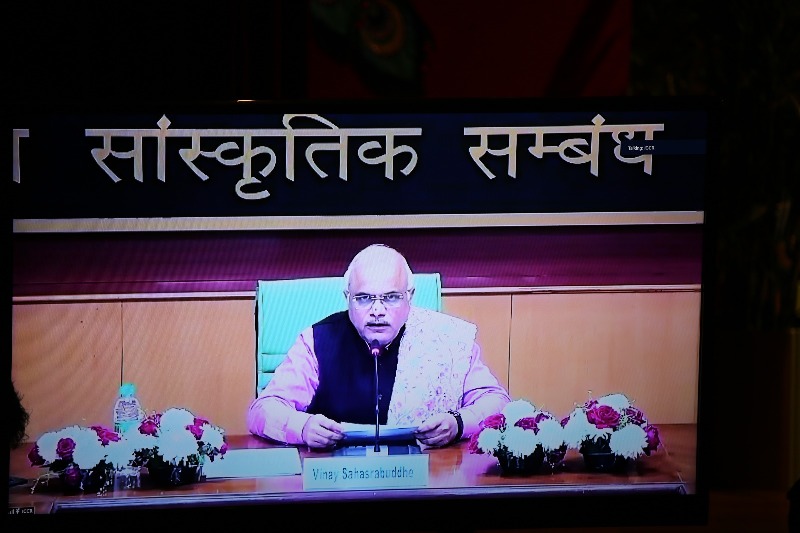 Thank you and good evening.