Joe Biden sworn in as 46th US President 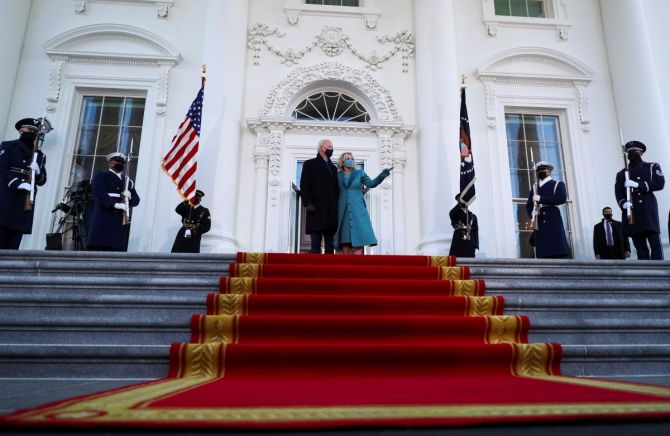 Joe Biden became the 46th president of the United States, vowing a "new day" for the United States after four years of tumult under Donald Trump who in an extraordinary final act snubbed the inauguration. He vowed to defeat political extremism and domestic terror in his first speech as US president.

President Joe Biden signed a blizzard of executive orders Wednesday on the coronavirus, immigration and climate change - launching a 10-day cascade of directives reversing the policies of his GOP predecessor as Democrats pushed for even more sweeping and prompt legislative action

Joe Biden held his wife Jill's hand as they strode up their new home's driveway Wednesday -- which was the only normal thing about the day he became the president of the United States.

US President Joe Biden said Wednesday that outgoing president Donald Trump had left him a "very generous" letter in the Oval Office, in keeping with tradition.

US President Donald Trump left Washington on Wednesday just three hours ahead of the inauguration of his successor Joe Biden, saying it had been an "incredible four years" and promising to be "back in some form."

At 78, Biden is the oldest president in US history and only the second Roman Catholic president. Harris, the daughter of Indian and Jamaican immigrants, became the highest-ranking woman in US history and the first person of color as the nation’s number two.