Opening Remarks by Amb. Sibi George At the ‘Remembering Mahatma Gandhi’ on Martyrs’ Day Organized by Embassy of India, Kuwait 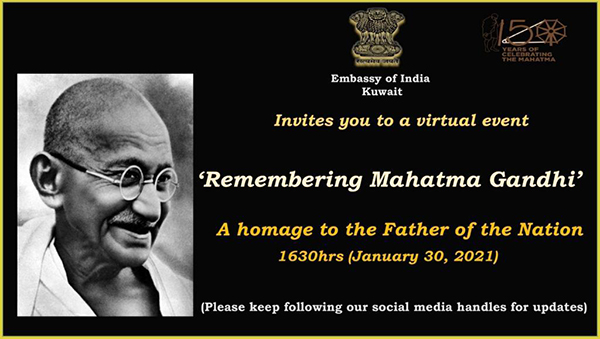 Mr. Mohammad Al-Qattan, who painted the portrait of Mahatma Gandhi,

A very Good Evening to all of you.

Today, we gather here on the solemn occasion of Martyrs’ day to pay our tributes and homage to our Father of the Nation, Mahatma Gandhi.

I welcome friends from the Kuwait Arts Association who have joined us today in Remembering Mahatma Gandhi, who decades ago attained martyrdom on this very day. I also welcome members of our community members who are present here and also joining us virtually. I also welcome the members of media for joining us.

I would like to begin my remarks by thanking His Highness Sheikh Nawaf Al-Ahmed Al-Jaber Al-Sabah, the Amir of the State of Kuwait, and His Highness Sheikh Mishaal Al-Ahmed Al-Jaber Al-Sabah, the Crown Prince of the State of Kuwait, for hosting the large Indian community in Kuwait and for their leadership in strengthening the bilateral relations between our two friendly countries.

Our Community in Kuwait, of around one million brothers and sisters, are widely respected and loved by all sections of the society in Kuwait. The admiration and affection garnered by our Community is a testimony to the Gandhian values and ethos of peaceful and harmonious coexistence that we as Indians continue to follow and abide by.

Today we remember, Mahatma Gandhi, our Father of the Nation. On Martyrs’’ Day we also recall the heroic sacrifices of all those great women and men who devoted themselves towards India’s freedom and wellbeing of every Indian. Gandhiji is an immortal universal treasure whose life actions, values and principles, and words of wisdom continue to be followed by billions of people around the world. In today's turbulent and challenging times, it is imperative that we ‘Remember Mahatma Gandhi’ and imbibe his noble thoughts, emulate his teachings and follow the peaceful path he had shown us.

Recalling his struggles, in eighteen hundred and ninety three, standing in front of thousands of Indian laborers in South Africa, Mohandas Karamchand Gandhi, a young lawyer from India said, “There are several causes for which I am ready to die for, but there are no causes for which I am ready to kill for.” This was a vow of non-violence in body, spirit and mind. It is with this weapon of non- violence Mahatma Gandhi won India freedom, a freedom that we continue to cherish in India as the world’s largest democracy with 900 million electorate.

Non-violence is a philosophy evolved over several centuries in India. It is part of the conscience of Indian life and society. Non-violence is not a weapon for the weak. It is the weapon for the strong. It requires greater heroism than of the bravest soldiers. It is the expression of the deepest love for all humans including one’s enemies. It is not only the lack of the physical harm towards others. It also lacks hatred and ill will towards them. Non-violence is not running away from the challenges that we face. It is not running away from our responsibilities. It is facing these challenges with courage and discipline.

In a world dominated by violence and hatred, Mahatma Gandhi reincarnated the Indian concept of non-violence. His example influenced and inspired many later freedom struggles. I recall the words of Martin Luther King Jr. who said, “Gandhi was inevitable. If humanity is to progress, Gandhi is inescapable. He lived, thought and acted, inspired by the vision of humanity evolving toward a world of peace and harmony.” Unquote. He continues to inspire millions across the world. His catchwords, now or never, do or die continue to evoke fear in the minds of oppressors. His famous words, “An eye for an eye makes the whole world blind,” remains a guiding principle for humanity. It is in recognition of this contribution that, in 2007 the United Nations General Assembly unanimously, I repeat, unanimously adopted a resolution to observe October 2nd every year as the International Day of Non-violence.

Gandhiji said; ‘My Life is My Message’. He was one of those who spoke as he thought, and acted as he spoke, one of those few, on whom no shadow fell between word and deed. His words were deeds, and they built a movement and a nation and changed the lives of countless individuals. He gave us a Talisman, which everyone who holds any public office needs to remember every day. He said, I quote: “Whenever you are in doubt, or when the self becomes too much with you, try the following. Recall the face of the poorest and the most helpless man or woman whom you may have seen and ask yourself, if the step you contemplate is going to be of any use to him/her. Will he be able to gain anything by it? Will it restore him to a control over his own life and destiny? Then you will find your doubts and yourself melting away.” Unquote. This should be a guiding principle for each one of us particularly during this Covid 19 crisis when we regularly come across many who need support and guidance.

Gandhiji’s also laid a lot of emphasis on self-reliant, self-sufficient villages. This idea has special relevance today, as India has now charted on a vision of building a self-reliant nation (Aatmanirbhar Bharat) and turning Gandhijis dreams into reality. COVID-19 pandemic has taught us a number of lessons and one amongst them is to be self-reliant. I am proud of the fact that we in India have risen to the challenge and have fared admirably. Our industrialists, technologists, innovators, scientists and researchers worked untiringly during the pandemic, manufacturing thousands of products from ventilators to PPE kits, from medicines to vaccines to finished products in a variety of areas, and have kept our flag flying high. Today, India has come forward and supplying vaccines to many countries across the world. Today, the world is reiterating its acknowledgement of India’s credentials as the Pharmacy of the World.

I am happy to receive this portrait of Mahatma Gandhi today at the Embassy. This portrait is a beautiful collaboration between India and Kuwait as the portrait has been drawn by renowned Kuwaiti artist, Mr. Mahmoud Al-Qattan, who is here with us today. I had the honour of visiting the Kuwaiti Artists Association and see the wonderful gallery.  I recall the warm welcome extended to me by the President of Kuwait Arts Association, Mr. Abdul Rasoul Salman and the leadership of the Association. We look forward to more collaborative efforts to connect the artists of our two countries, in coming weeks and months when we celebrate the 60th anniversary establishment of diplomatic relations between our two countries and also the 75th anniversary of India’s independence.

I once again thank you all for your overwhelming participation today.

Thank you and good evening.