Transcript of Opening Remarks by Ambassador Sibi George at the Press Conference on March 30, 2021 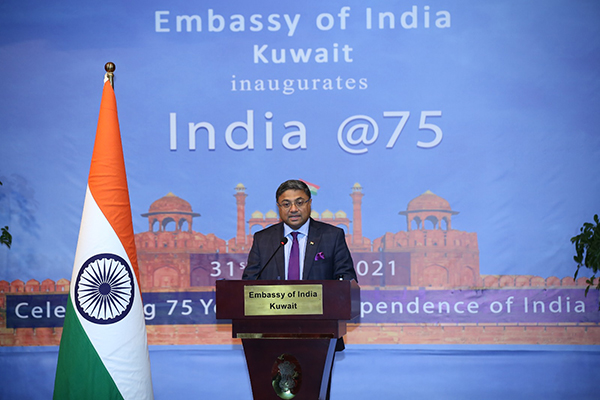 Thanks for joining us today. Welcome to Embassy of India. It has been some time since we met together at India House. 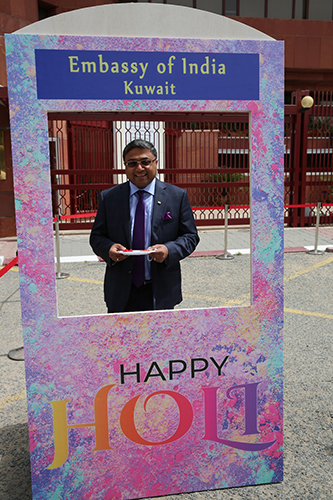 I requested us to join today for a briefing of a very important milestone in the history of India that we celebrate in Kuwait. Tomorrow March 31, we are launching a two year long celebrations of 75th anniversary of India’s independence. As you are aware India become a sovereign independent country in 1947 on August 15. We will celebrate the anniversary till August 15, 2023.

On March 12, Hon’ble Prime Minister of India Shri Narendra Modi had launched the 75th anniversary celebrations captioned ‘Azadi Ka Amrut Mahotsav' by flagging off a 241-mile march from Mahatma Gandhi’s Sabarmati Ashram in Ahmedabad to Dandi in Gujarat. Since then all the Indian Missions abroad have been launching their own programmes. Tomorrow we at the Indian Embassy in Kuwait is doing its program. It is a very important milestone in our relations with Kuwait as this year we will also be celebrating the 60th anniversary of establishment of diplomatic relations between India and Kuwait. The main official function of the 60th anniversary celebrations we will do later this year.

The celebrations of the 60th anniversary will further deepen our excellent bilateral relations. You recall the visit of Hon’ble Foreign Minister of Kuwait H.E. Sheikh Dr. Ahmad Nasser Al-Mohammad Al-Sabah to India, when we issued a Joint Statement setting up the Joint Commission Meeting at the Ministerial level. During the anniversary year we will work towards further strengthening our long standing dynamic partnership.

Today India is witnessing a positive transformation. In recent years, India has made significant progress in agriculture, food production, energy, healthcare, education, and various fields of science and technology. We have made our mark in the international arena in the fields of information technology, mass media and communication, space technology, defense production and Nuclear energy and solar energy. India has some of the best technical institutes in the world like the Indian Institute of Technology and Indian Institute of Science. In a nutshell India is emerging today as a vibrant modern economy. We are on the way to become an ‘Aatmanirbhar Bharat’, a self-reliant economy. In this economic transformation India considers countries like Kuwait as partners.

Starting from tomorrow we are launching a series of activities in Kuwait with the partnership of Indian diaspora and our friends in Kuwait. Of course, we will organize each of these events fully abiding with the protocol and guidelines of the Covid 19 pandemic.  To commemorate the 75th anniversary we are plan to organize four kinds of events: 1. events aimed at highlighting the New India to the world, its economic and scientific achievements and transformation, both at national and state levels; 2. events to celebrate and showcase India’s rich and varied cultural diversity, its civilizational heritage and its several festivals; 3. events to celebrate the life and contributions of our national heroes, who have made sacrifices during our freedom struggle and contributed to building a New India; and 4. events to promote economic and scientific cooperation, tourism, cultural interaction between India and Kuwait and in building people to people relations. I am sure that each of these events contribute in building bridges between India and Kuwait.

In these celebrations, I consider our media as important partners. I look forward to your support in reaching out to all friends of India.

We will continue to update you regularly. Once again thank you for joining us today. I will be happy to take questions.