Release of the Logo for the Celebrations of 60th Anniversary of India-Kuwait Diplomatic Relations at Embassy of India in Kuwait, March 31 , 2021 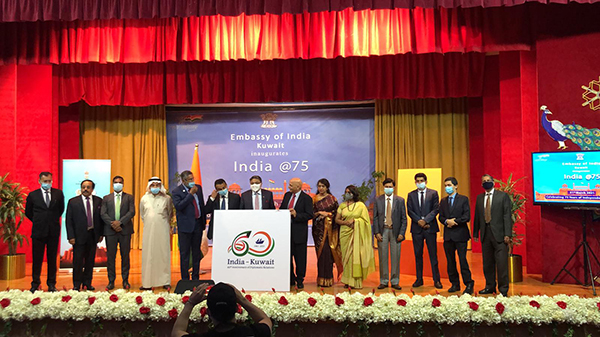 On March 12 Hon’ble Prime Minister of India Shri Narendra Modi Ji inaugurated the Azadi Ka Amrit Mahotsav at Mahatma Gandhi’s Sabarmati Ashram in Gujarat. That was the beginning of festival to celebrate the 75th anniversary of India’s independence. These celebrations will continue till August 15, 2023. In fact on March 12, the 1.3 billion Indians and the millions of Indians abroad began celebrating the 75th anniversary which is a major milestone in the history of modern India which will continue till August 15, 2023. 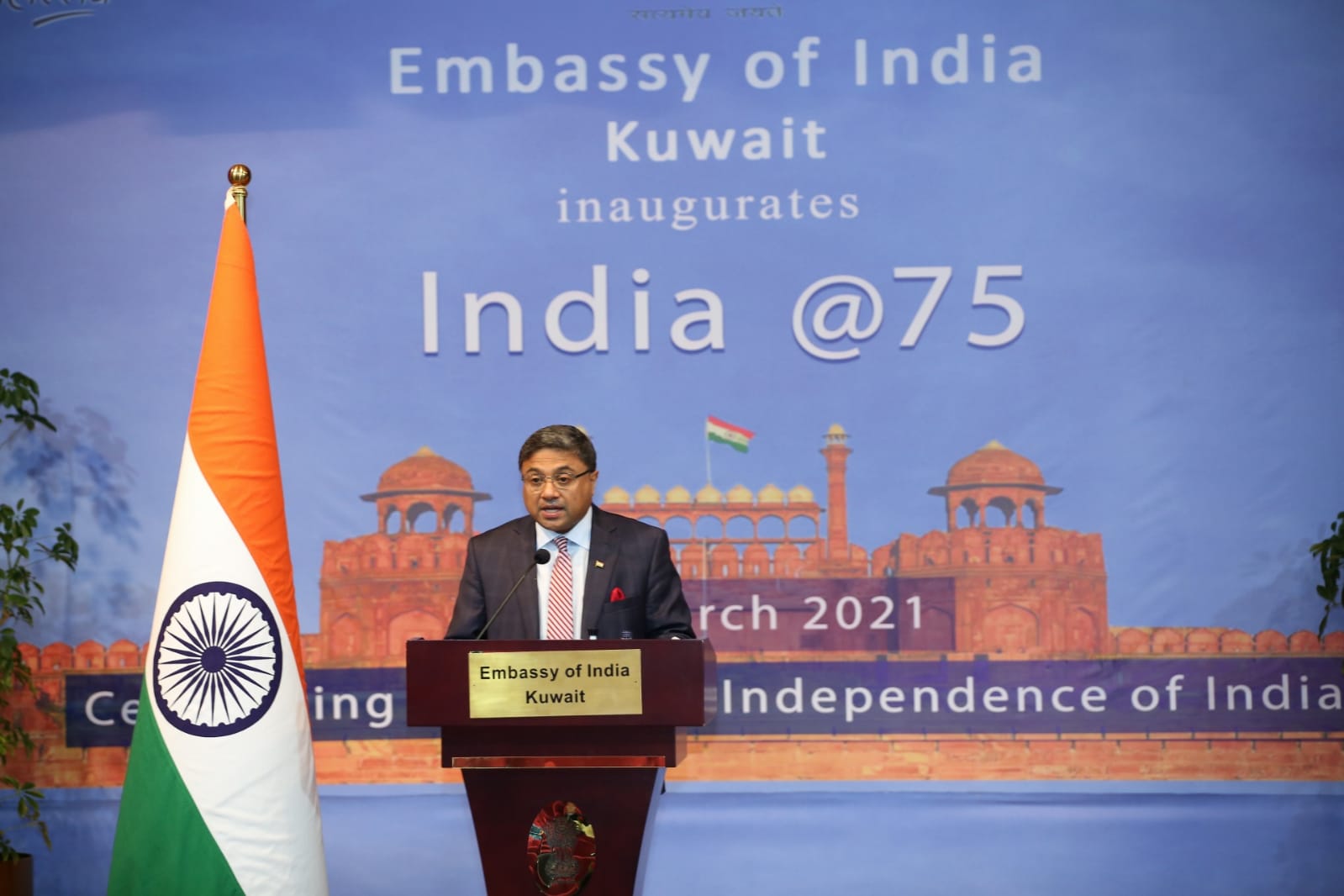 In Kuwait, we are launching the 75th anniversary celebrations today. I am honoured to welcome Secretary in the Ministry of External Affairs Ambassador Shri Sanjay Bhattacharyya. As Secretary he is responsible for our passport services, consular relations and diaspora affairs, he oversees our relations with the Arab world, is Sherpa to BRICS and representative to Jal Jeevan Mission. I am grateful for him for accepting my invitation to join us to inaugurate the 75th anniversary celebrations in Kuwait. As the Secretary in charge of all passports in India and abroad he is playing a key role in the smooth delivery of passports all across India and abroad despite the Covid 19 challenges and restrictions. I am particularly thankful for him for extending full support and guidance for the Mission in our efforts to ensure the welfare of the Indian community in Kuwait. He has been in the forefront of extending all support for those affected by the many challenges caused by the Covid 19 pandemic. Whether it is the Vande Bharat Mission or the Indians who are stranded in India and abroad or the Engineers Issue or smooth conduct of the forthcoming CBSE examination, on each of these issues he was and is in the forefront of support to the Mission. Sir, on behalf of the Indian diaspora in Kuwait I thank you for joining us and extend you our warm welcome. I also welcome our speakers today, our diaspora members and friends of India in Kuwait.

In this address on March 12, inaugurating the Azadi Ka Amrit Mahotsav Hon’ble Prime Minister Shri Narendra Modi spoke about five pillars of the festival, these are Freedom Struggle, Ideas at 75, Achievements at 75, Actions at 75 and Resolves at 75 that will inspire the dreams and duties of a free India to move forward. He said and I quote “History is witness to the fact that the glory of a nation remains conscious only when it teaches the next generation of the traditions of self-esteem and sacrifice, and inspires them continuously. The future of a nation is bright only when it is associated with the pride of its past experiences and heritage. And India has a profound repository to take pride, a rich history and a conscious cultural heritage”. Unquote.

Referring to India’s achievements in various fields since its independence Prime Minister said, I quote: “Friends, India's achievements are not just our own, but they are going to enlighten the whole world and to awaken hope of the whole humanity. Our development journey with India's self-sufficiency is going to speed up the development journey of the whole world. It has been proved during the Corona period. India's self-sufficiency in vaccine manufacturing is benefiting the whole world today, lifting humanity out of the pandemic crisis. Today, India has the power of vaccine and we are working to relieve the misery of all in the spirit of “Vasudhaiva Kutumbakam”. We have not given grief to anyone, but we are trying to reduce the sufferings of others. This is the ideal and the eternal philosophy of India and it is also the philosophy of ‘Atmanirbhar Bharat’. Today, the countries across the world are thanking India, trusting in India. This is the first hue of the sunrise of the new India, the first aura of our grand future.” Unquote.

It is in this spirit that we celebrate the 75th anniversary in Kuwait starting today and which will conclude on August 15, 2023. While we celebrate this anniversary of independence in Kuwait, there is another important milestone that we celebrate in our bilateral relations with Kuwait. The 60th anniversary of establishment of diplomatic relations. During this anniversary year we will work towards further promoting our long standing dynamic partnership with Kuwait including through political exchanges and economic and people to people exchanges. We have a very vibrant Indian diaspora which is contributing immensely in promoting our bilateral relations. Today we are launching the logo for the 60th anniversary which was selected from a competition that witnessed overwhelming response. The main official function of the 60th anniversary celebrations we will do later this year. 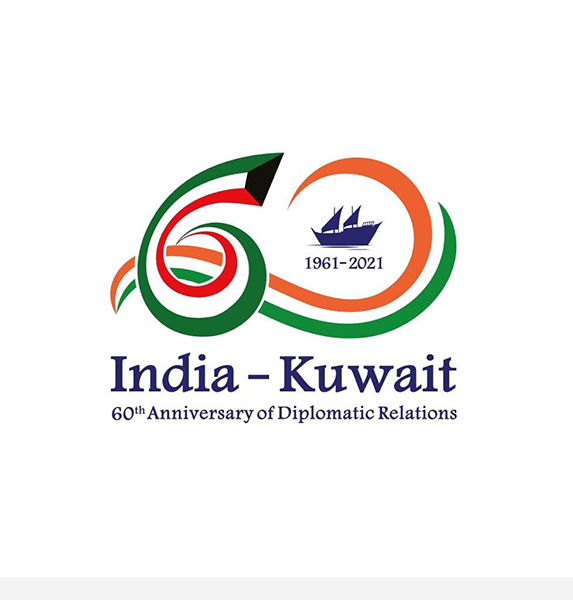 During the two yearlong celebrations we plan to organise 750 events to celebrate the 75th anniversary and 600 events to celebrate the 60th anniversary of diplomatic relations. We will organise events aimed at highlighting the New India to the world, its economic and scientific achievements and transformation; events to celebrate and showcase India’s rich and varied cultural diversity; events to celebrate the life and contributions of our national heroes; events to promote economic and scientific cooperation, tourism, cultural interaction between India and Kuwait and in building people to people relations. I am sure that each of these events contribute in further building bridges between India and Kuwait. With the participation of our vibrant diaspora, our Indian associations and groups, our business enterprises, our schools in Kuwait, our media houses, and in partnership with our Kuwaiti friends and various cultural organisations we will be able to achieve this target.

Before I conclude, I would like to emphasise that while we celebrate India in Kuwait, we will continue to focus on the smooth and efficient consular services at the Embassy and take measures to ensure the welfare of each and every Indians in need in Kuwait. Welfare of our diaspora is a priority for me and that will always remain my priority. Let me reiterate those who need help and support are not liabilities, they are not strangers; they are our brothers and sisters, they are not problems, they are our priorities. They will always receive a warm welcome at the Embassy.

With these words, I request Secretary Ambassador Shri Sanjay Bhattacharyya to inaugurate the 75th Independence Day celebrations in Kuwait and also launch the logo for celebration of the 60th anniversary of establishment of our diplomatic relations with Kuwait. 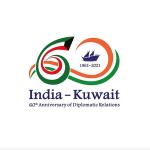 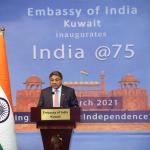 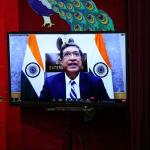 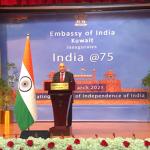 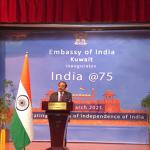 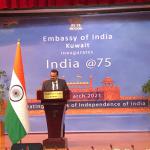 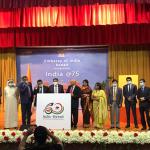 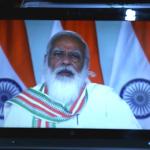 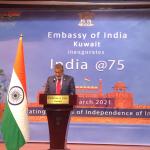