Kuwait will continue to provide assistance and support to India as it tackles a “worsening situation” as a result of the coronavirus pandemic, Foreign Minister Sheikh Dr. Ahmad Nasser Al-Mohammad Al-Sabah said on Friday. In a phone call with his Indian counterpart, Kuwait’s Foreign Minister, who doubles as State Minister for Cabinet Affairs, reiterated his country’s commitment to providing New Delhi with “all the essential requirements” it needs during these “difficult circumstances” amid the ongoing spread of the COVID-19 variant. 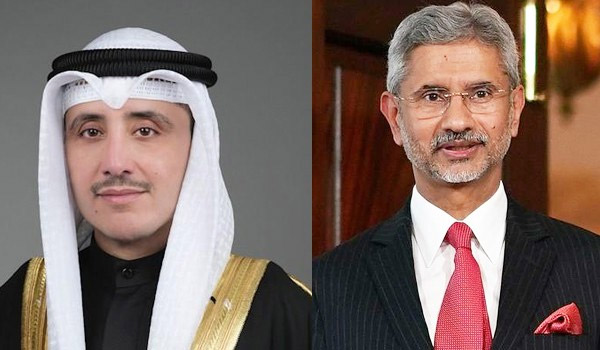 For his part, India’s Minister of External Affairs S. Jaishankar expressed his country’s appreciation and gratitude for this supportive stance, saying it reflects the depth of historical relations between the two friendly countries. During the talks, the two officials also discussed their countries’ solid bilateral relations, and means to enhance these ties. Kuwait Ambassador to India Jassem Al-Najem said last week another shipload of relief supplies has arrived in Indian port as part of the sea bridge and that more ships are arriving in Indian ports loaded with medical oxygen to fight the spread of coronavirus.

Aid
Ambassador Al-Najem told Kuwait News Agency on arrival of the Indian navy ship carrying 210 tons of oxygen and 1,200 oxygen cylinders that the second stage of aid supply from Kuwait is to fill the deficit in shortage of medical supplies in India in wake of the second wave of COVID-19 pandemic and to help lessen the suffering of the friendly Indian people. In the first stage of the sea bridge, three military ships and a merchant ship had set off from the Shuwaikh and the Shuwaiba ports with 215 metric tons of liquid oxygen and 2,600 metric tons of aid. Kuwait is in the forefront of world countries providing large quantities of oxygen to India.

The first stage of the sea bridge witnessed the arrival of three military ships and a merchant ship that set off from Shuwaikh and Shuaiba Ports carrying 215 metric tons of liquid oxygen and 2,600 metric tons of aid. Al-Najem added that the sea and air bridge that carries the huge empty oxygen tanks to Kuwait aims to transport a total of 1,400 metric tons of liquid medical oxygen, making Kuwait one of the countries in the world supplying highest quantity of oxygen to India. A Kuwait Air Force plane had landed at Indira Gandhi International Airport in the New Delhi loaded with 40 tons of relief materials provided by the Kuwait Red Crescent Society, including oxygen concentrators, ventilators, oxygen cylinders, medicines and other medical supplies and various relief materials , (KUNA).