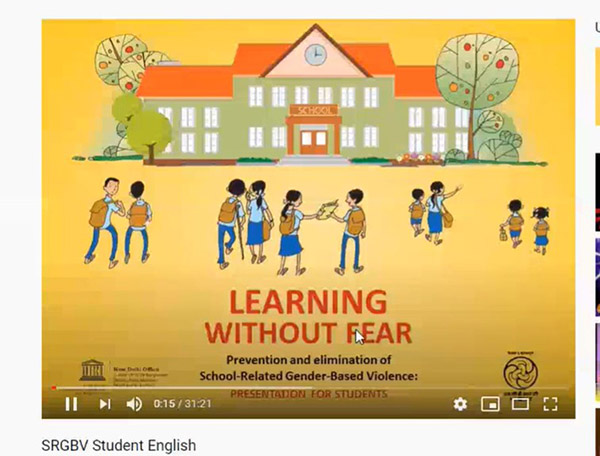 Joining the UNESCO, New Delhi Office, which is mandated to cover the countries of South Asia and aims at promoting world peace and security through international cooperation in education and culture, Bhavans Indian Education School, Kuwait, observed the first-ever ‘International Day against Violence and Bullying at School (Including Cyberbullying)’, under the theme ‘Together against Bullying in School’, on November 5, 2020. The UNESCO considers the present time as a critical moment to bring much needed attention to the issue of school bullying – the most prevalent form of violence in schools - which affects almost one in three learners, and considerably impacts education and wellbeing outcomes. It is an undeniable fact that in the wake of the COVID-19 pandemic, there have been increasing cases of bullying, especially cyberbullying to which many students have fallen prey.

As part of the observance at IES, the Department of English conducted a few meaningful activities during the English periods in the virtual classrooms. The students were shown a 30-minute-long video presentation titled ‘Learning without Fear’, on ‘School- related Gender Based Violence’, produced by the UNESCO New Delhi Cluster. The video comprised the information regarding different types of bullying, the effects of bullying on children and the ways to stop bullying. The presentation was followed by very productive and interactive discussions. The students also watched a 5-minute-long video presentation titled ‘Safety and Security against Violence and Injuries’ produced by the UNESCO New Delhi Cluster. They actively participated in the follow-up discussions as well. A poster titled ‘Learning without Fear’ issued by the UNESCO, New Delhi, was displayed in all the virtual classrooms of all the grades. The teachers of English shared a cornucopia of information pertaining to the laws existing in India for child protection such as POCSO Act. The report and video snippets of the virtual events were uploaded on the website of UNESCO, New Delhi.

The Bhavanites felt highly privileged in joining the global campaign of the UNESCO to build a global momentum to end bullying in schools by raising awareness of the issue, sharing ways to address and eliminate violence in schools and mobilizing governments, experts and the educational community to come and work together in preventing violence and bullying in schools.