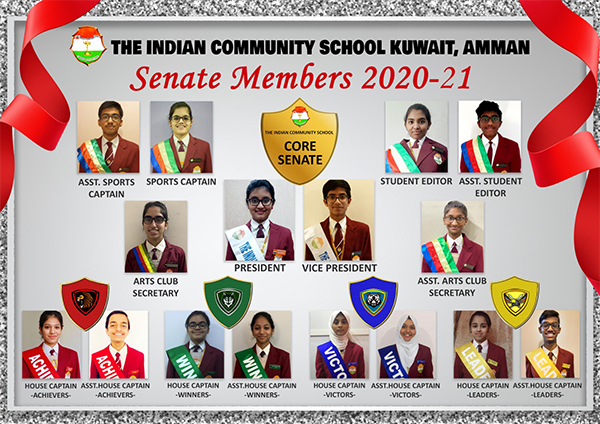 The Indian Community School Kuwait, Amman held its first ever Virtual Investiture Ceremony, the most celebrated event in the school year on Tuesday, Nov 10th , 2020 in the presence of  the distinguished Chief Guest Dr. Neeti Mathur, Director Neeti Mathur Consulting Pvt. Ltd., Asst. Professor (Management) and Asst. Registrar (Placement) National Law University, Jodhpur who joined the ceremony from India, Principal ICSK Senior and Sr. Administrator Dr.V.Binumon, other invited guests and parents . Principals, Vice Principals and Deputy Vice Principals of branch schools joined the event.  The Investiture Ceremony is one of the significant occasions of the school where the newly elected senate members are officially vested with their responsibilities.

The highlight of this year was the Virtual filing of Nominations, Campaigning through Social Media and the successful conduct of the Virtual Senate Elections, all of which gave students a new learning experience even during this global pandemic.

The prayer song brought back nostalgic memories making it an emotional moment, which was followed by the auspicious Virtual lighting of the lamp. In this Virtual Investiture Parents played the very important role of investing their wards - the Core Senate members, the House Captains and Vice Captains with the badges of office.

Principal Mr. Rajesh Nair administered the Oath to the members of the newly elected Senate. Students also got to experience the Virtual journey of the Electoral Process. Senate Advisor Mrs. Jaya Nirmal introduced the Chief Guest.

In her address the Chief Guest emphasized the qualities of a great leader stressing on the importance of being humble and a good listener. She inspired the newly elected members of the senate to shoulder their responsibilities with vigour. A melodious Inspirational song was rendered by the School Choir “Standing in the Hall of Fame” which was followed by the Senate members expressing their gratitude and promises.

Senate President Vineetha Anish gave the acceptance speech which was followed by the Vote of thanks proposed by the Vice Principal Dr. Mary Isaac.