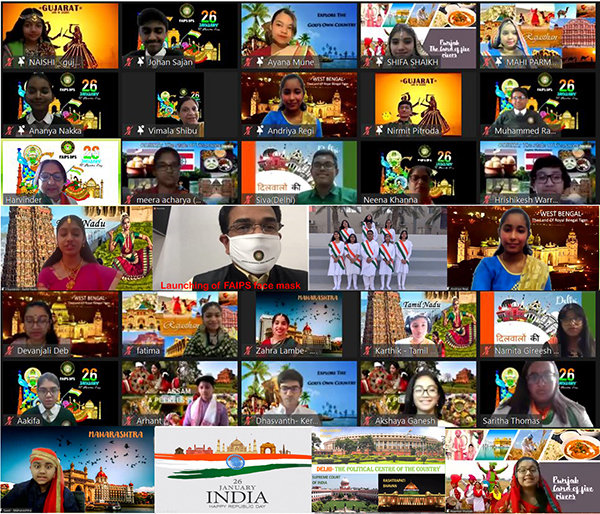 "A nation’s culture resides in the hearts and souls of its people". These words of Mahatma Gandhi, Father of our Nation aptly found expression on January 26th 2021 when the students of FAIPS (DPS) took the viewers through a virtual tour of India’s cultural heritage. The event held on Zoom platform highlighted the unique and vast diversity of India by showcasing the myriad cultures and special features of a variety of Indian States.

The Special assembly conducted by students of class IX displayed the multicultural facets of India. The assembly commenced with the recital of the Holy Quran followed by the Kuwait National Anthem. After invoking the blessings of the Almighty with a short prayer, Principal Mr. Ravi Ayanoli, in his message exhorted the students to uphold the values set forth by our freedom fighters. While encouraging the students to pursue their goals to build a strong nation with single minded devotion, he also urged them to see various issues that we face today in a global perspective. Headmistress Ms. Harvinder Anand in her message adjured the students to imbibe the rich tradition of our diverse nation and march forward with hope and determination.

The students then proudly represented the cultural heritage and various contributions of several states of India. This display was a manifestation of the unity and diversity of our great nation. The songs sung by the talented students evoked great patriotic fervour among the viewers of the programme.

On this auspicious occasion, reiterating the necessity of taking special care in the current pandemic times, the Principal, Mr. Ravi Ayanoli, launched the FAIPS(DPS) mask. Having a unique mask for the school was the idea suggested by the student body. This mask is available in the School Uniform Store.

The assembly concluded with the playing of the Indian National Anthem.