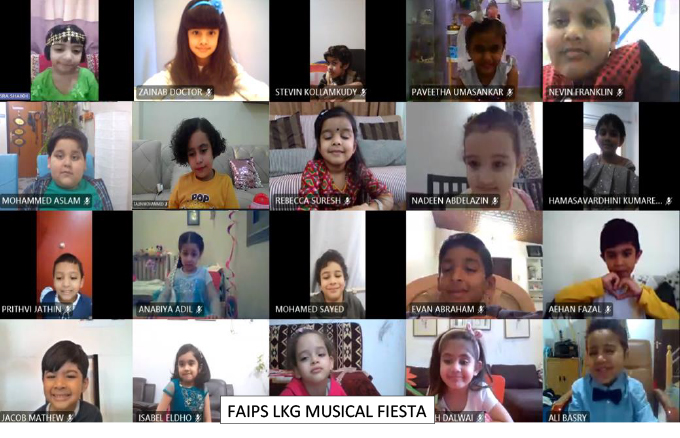 Struggling to provide the essential educational necessities to tiny tots during the triumphant journey of the Covid-19, the academic year has come to an end successfully with a virtual musical fiesta organized by FAIPS Kindergarten on Wednesday, 10th March, 2021.
The event commenced at 4 pm and began with a melodious music, thereafter the LKG teachers addressed their class students and the parents with a warm welcome note. This time, to make a difference UKG teachers were the Guests of Honour and were welcomed by each class with lots of excitement. The guest congratulated the kids for completing their academic year and encouraged them for their future endeavours. Later the program was followed by the beautiful PowerPoint presentation which was named as, “The Shining Stars”, in which each slide included pictures of the student in different moods. The teachers spoke to their students regarding their academic performances, bringing smiles to the kids’ faces. They were bubbling and bursting with joy. It was a wonderful and a remarkable moment.
The Musical Fiesta began with the stunning performances which included poems, rhymes, and songs in English as well as other languages too. Other items which kept the audience enthralled included instrument playing as well as some dances.
With heavy hearts filled with great pride and joy, it was time to say goodbye to the little ones. The parents were left speechless and were filled with immense pride in their hearts. And their eyes with tears of joy which showed a great appreciation that paid off all the efforts taken by all the teachers.
The mesmerizing event - a special day for the LKG students, was remarkably executed by the KG team under the visionary leadership of Mr. Ravi Ayanoli, Principal, FAIPS(DPS), Kuwait. His endeavors and farsighted vision has transformed the virtual classrooms into happy classrooms! He congratulated the entire team of Kindergarten, especially the Head mistress Mrs. Bharti Tiwari, for her able guidance to the team of amazing teachers and organizing the spectacular event.
The program concluded with an online class photo shoot.