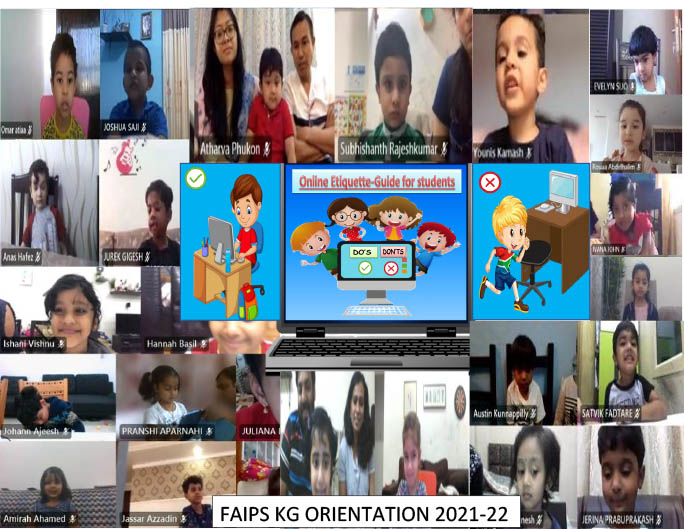 Elementary education is a holistic experience which nurtures, develops and evolves with a close cooperation between the school and the home, specifically a close contact between the teacher and the parent. With this vision, the FAIPS – DPS Kindergarten organized an “Orientation” for the parents of newly admitted children on Sunday 28th March and Monday, 29th March, 2021 with a view to orient the parents in guiding their children a smooth entry and enjoyable learning at FAIPS. During the orientation session, the parents were warmly welcomed and introduced about the usage of MS teams. Then, the children were introduced to their respective classmates and teachers.

A video on online etiquettes was shown to the parents which stated several points -how to use the online tools, the presentation of the students during their classes, the dos and don’ts which have to be followed during the online classes, etc. Parents were briefed about the monthly newsletter/syllabus and the weekly schedule/work. Further, the class timings, core and elective subjects for each grade were also shared with the parents.

The Orientation Program helped to outline and reaffirm the teachers’ and parents’ role as partners in education. Children are not things to be molded, but are talents to be unfolded… the teachers laid the foundations of engaging them with lots of joy, enthusiasm and energy!

The program concluded with a class photo shoot. Thus, the tiny tots began a fun filled and fruitful academic year ahead of them at their second home - FAIPS Kindergarten.