“Savour the Success of the Past, Enjoy the Blessing of the Present & Look Forward to the Promises of the Future” 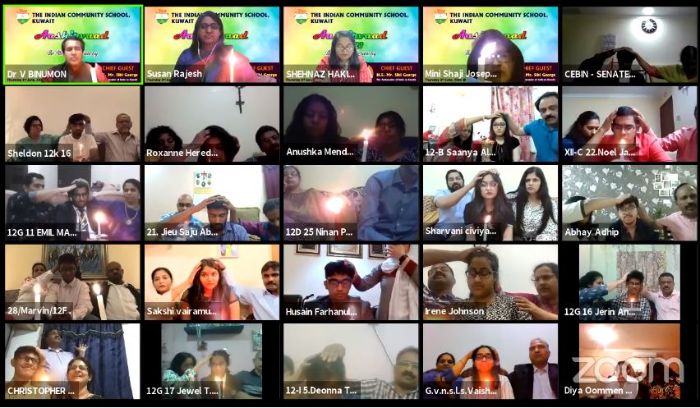 ICSK shapes each of its students to become Global Citizens. It nurtures them academically, socially and gives them abundant opportunities and platforms to recognize their potentials and develops each student to build a charismatic personality.  The successful journey of the students with ICSK culminates with the completion of class 12. Each year an auspicious program ‘Aashirvaad’ is held to bless and appreciate the outgoing students of Class 12.  This year, we were honoured to have H. E. Mr. Sibi George, The Ambassador of India to Kuwait as the 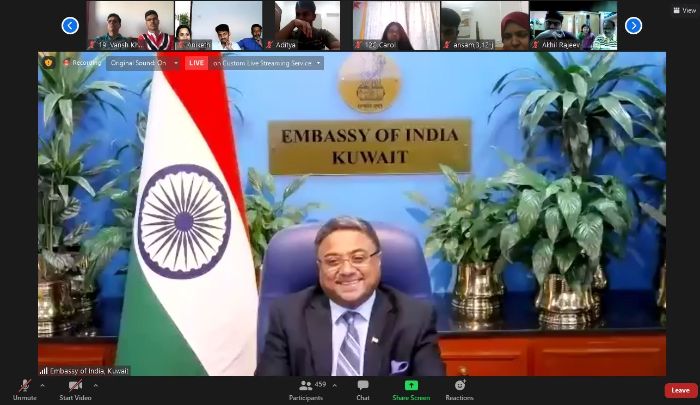 Chief Guest who virtually showered the Students with his blessings and addressed the gathering with his inspiring and motivational words.

This year’s virtual blessing ceremony ‘Aashirvaad’ was held on 3rd June, 2021. The Master of Ceremonies Mrs. Shehnaz Hakim greeted all and stated some ground rules.  Afifa Mansoor of X-D recited the Islamic prayer 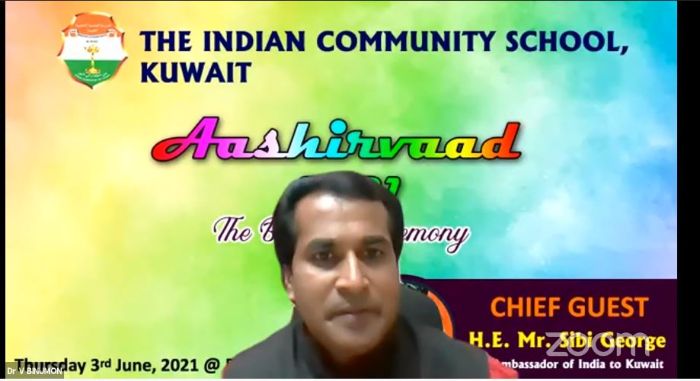 followed by  ‘Aaradhana’ a prayer song by the school choir, followed by the Kuwait and Indian national anthems. Dr. V. Binumon, Principal and Senior Administrator, ICSK Senior gave a warm and heartfelt welcome to the Chief Guest, H.E. Mr. Sibi George, The Ambassador of India to Kuwait. He also welcomed the  Honourable Chairman Mr. Sheik Abdul Rahman, and Honourable members of the Board of 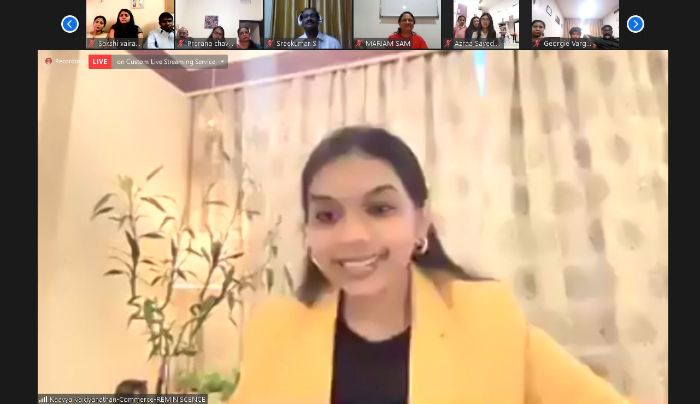 Trustees of ICSK, Principals, Vice-Principals and Deputy Vice Principals of all the branches, Academic Supervisors, Subject HOD’s, Class teachers, Subject teachers, Parents and Students. He showered his blessings on the students of Class 12, wishing each one of them a bright and prosperous future. Mrs. Srikala Dileep, HOD department of Social Science, 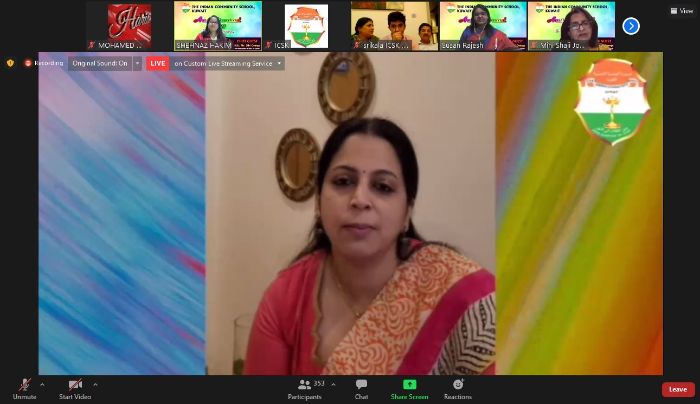 warmly welcomed the Chief Guest and presented an insight into his dedicated achievements, honours and numerous prestigious portfolios held by him.

H. E. Mr. Sibi George blessed the students and addressed them with his inspiring words. He 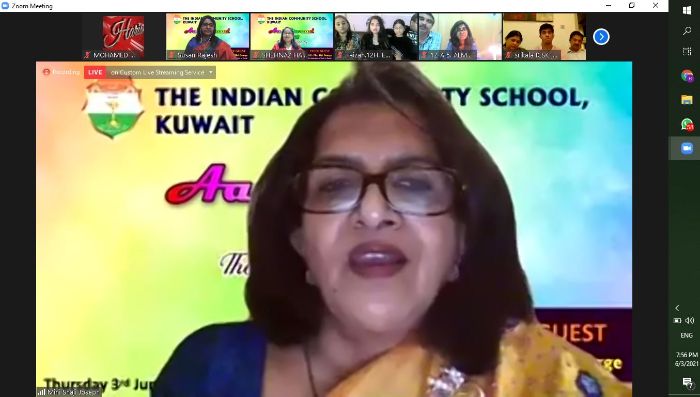 congratulated the graduates, who have managed through an extraordinary academic year with resilience, through online mode of teaching, the new normal. He motivated them by narrating the success stories of Christopher Columbs, Edmund Hillary and Neil Armstrong and Tenzing Norgay, who against all odds were successful, all four having one common guiding force – FIRM DETERMINATION. He 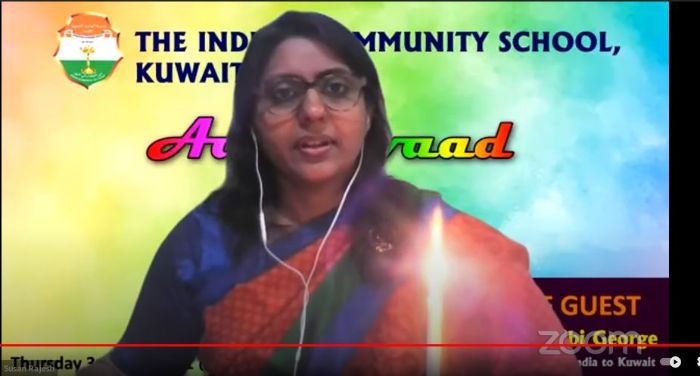 then inaugurated the program by a virtual lamp lighting ceremony followed by him graciously presenting the Academic Excellence Awards and Mementos to the graduating students. Honourable Chairman Mr. Shaik Abdul Rahiman thanked the Chief Guest for his gracious presence and presented a digital memento as a token of gratitude. Master Cebin 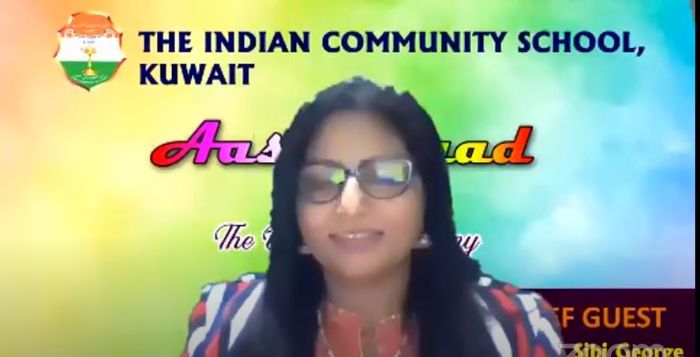 Biju, Senate President of 2020-’21 conveyed his gratitude and especially thanked Dr. V. Binumon for his constant inspiration, guidance and support. He also thanked Mrs. Susan Rajesh, Vice Principal ICSK Senior for her relentless concern and motivation. He thanked all the teachers, parents and students and wished the students a bright 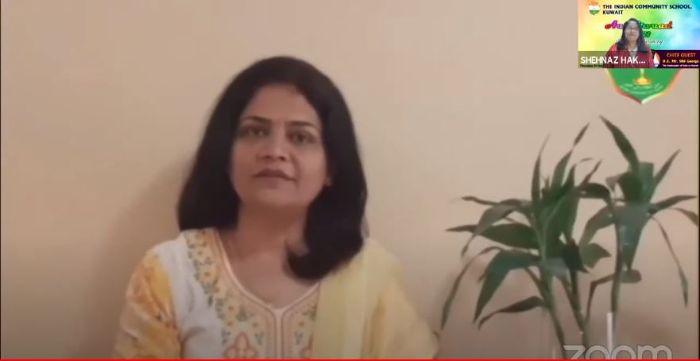 future ahead. Reminiscence speeches were given by student’s representing - Science, Commerce, Humanities and NIOS. They expressed their heartfelt gratitude to all the mentors. There after each students photo with parents and the students’ career aspirations was virtually displayed. Digital Mementos of Appreciation with 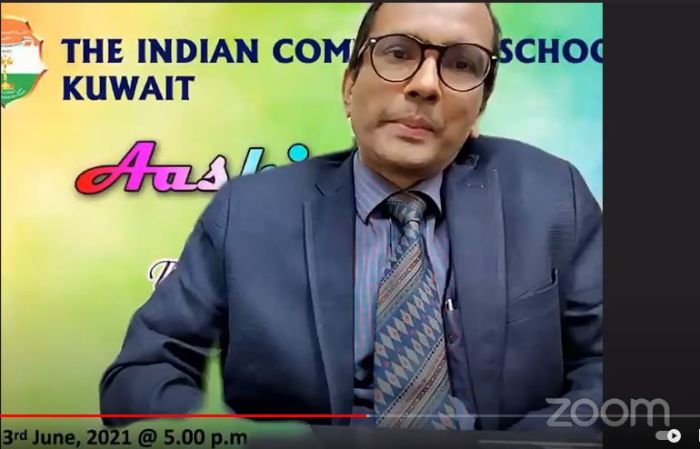 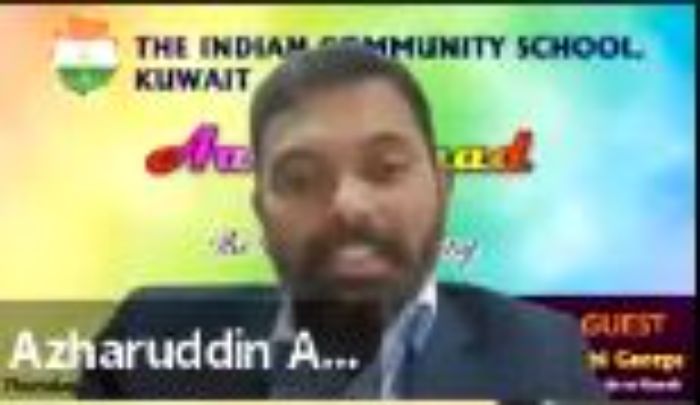 Khaitan, and Mrs. Sherly Dennis, Principal ICSK Junior. The Teachers blessed the student through a video presentation ‘Vistas of Blessings’. Then candles were lit by everyone, where parents transferred the flame from their candle, to their wards, symbolizing the transfer of hope, love and knowledge. This was followed by a prayer by Dr.V. Binumon, who sought the blessings of the Almighty for the success and prosperity of each student while parents placed their hands on the head of their child or held them in their hands, transferring the power of positivity. This was followed by Exhortation, by Mrs. Susan Rajesh, Vice-Principal, ICSK Senior. Finally the vote of thanks was given by Mrs. Mini Shahji, Dy. Vice-Principal ICSK Senior, She told the students to think big, aim for the stars and be optimistic in whatever they do. Dutifully, she also registered her heartfelt gratitude to H.E. Sibi George for gracing the occasion with his benevolent presence, the Honorary Board of Trustees, and all present. She especially thanked Mrs. Srikala and her team, for coordinating this program. She ended her speech with a beautiful quote by Dr. A.P.J. Abdul Kalam – “If you want to leave your footprints on the sands of time, never drag your feet.”