“Leaders are the role models who inspire the followers and motivate them to reach the pinnacle of success.” 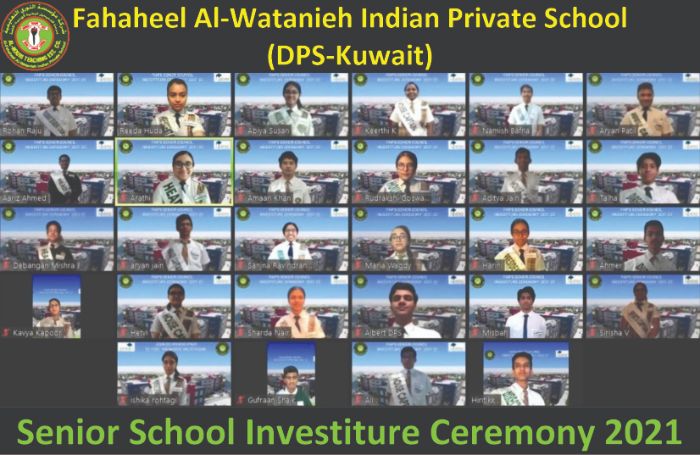 In a spectacular Investiture Ceremony organized on a virtual platform on Friday, June11, 2021, FAIPS-DPS bestowed responsibilities on the 29 members of the newly appointed senior student council, chosen after rigorous interview and selection procedure, for the academic year 2021-22.

The programme commenced with the Kuwait National anthem and recital of verses from the Holy Quran was followed by the rendition of morning prayer by the Principal, Mr. Ravi Ayanoli. In his address, Mr. Ravi blessed the members of the council and urged them to be dutiful and responsible and do their best to bring about positive changes in the school.  He exhorted them to uphold the values and admonished them to be impartial and honest in discharging their duties.

Ms. Subbulatha Ramachandran, Head of the Physical Education Department announced the names of the newly- appointed council members and invited the parents to pin badges for their wards. The elated parents felt privileged to be a part of this august occasion as they did the honours.  The Students’ Council took the oath of office administered by the school Principal Mr. Ravi Ayanoli, wherein the council members pledged the oath of commitment and endurance to discharge duties to the best of their abilities.

The outgoing Head Boys and Head Girls then gave nostalgic speeches reminiscing their time spent in FAIPS, as they handed over the mantle to their successors.  The newly inducted Head Boys Aariz Ahmad and Debangan Mishra and Head Girls Arathi Sasidharan and Sanjna Ravindranath, expressed their gratitude to be chosen for this position and promised to work for a better future for the council and the school. The vote of thanks proposed by the Vice Principal, Ms. Vineeta Munshi brought a culmination to this solemn programme.  The school song followed by Indian National Anthem marked a smooth end to a momentous virtual day.