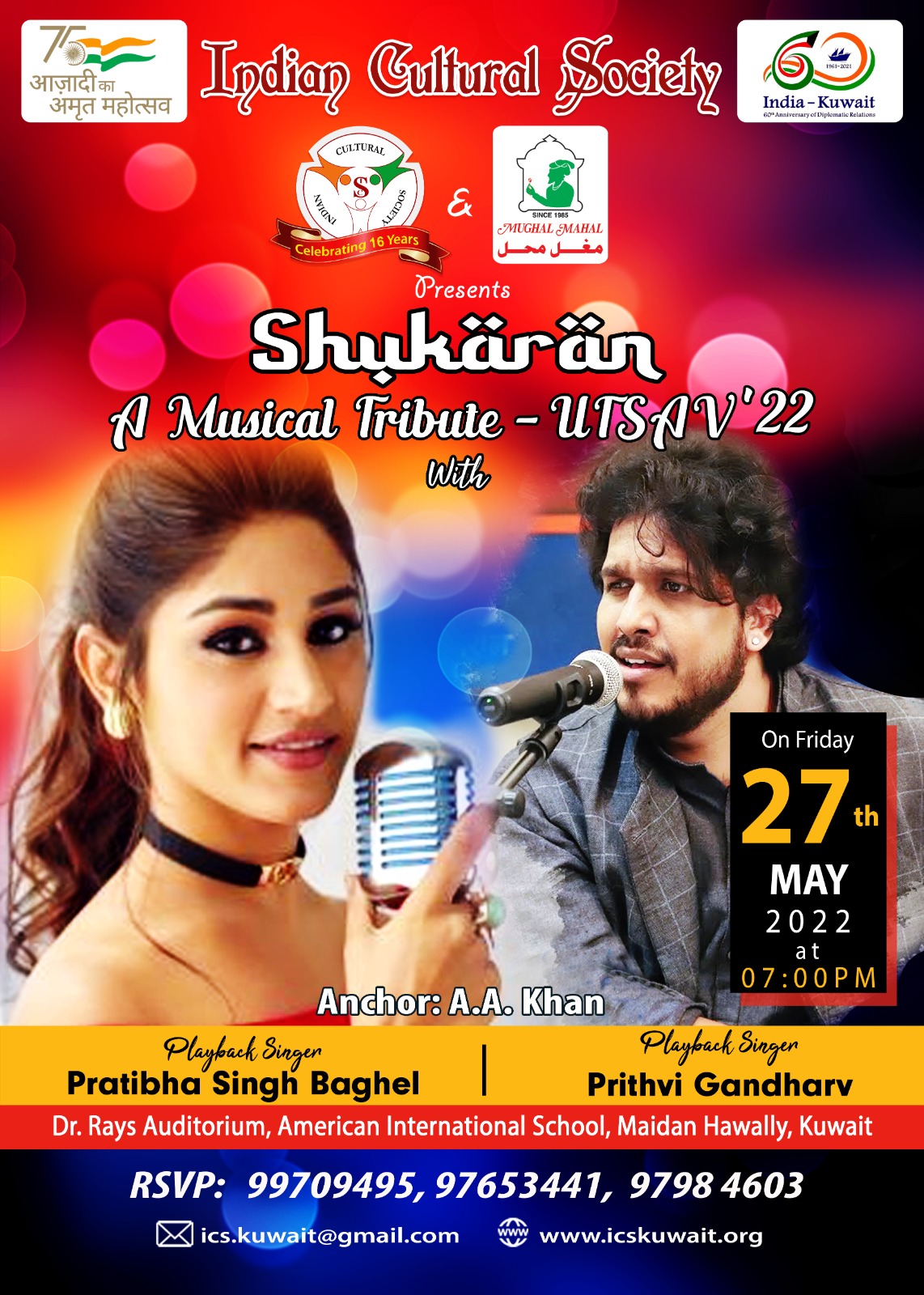 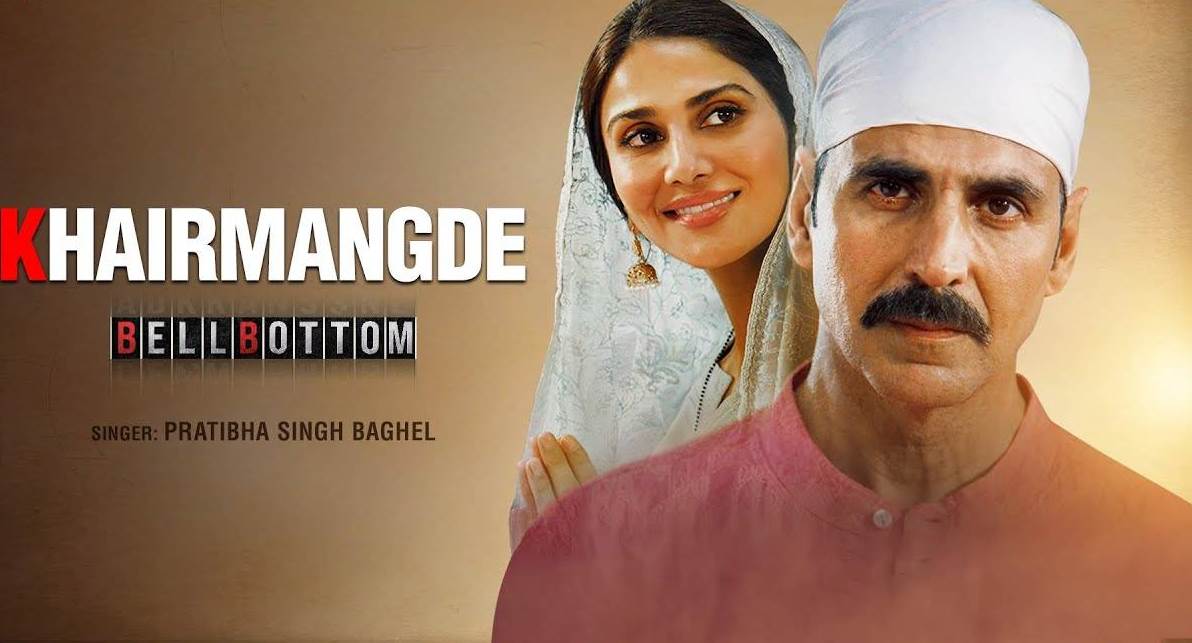 Shukran is a concept to thank the warriors specially the cleaners, porters, ward staff, ambulance drivers, lab-technicians, pharmacists, para-medical staff, police and most important the doctors & nurses. In difficult times like these, ICS & Mughal Mahal made its motive to do their part in contributing to the society and the Indian music fraternity.

The Chief Guest of the event is none other than H.E. Shri Sibi George (Ambassador of India, to Kuwait). It will be an honor to have his blessings and presence at our show. In the last two years, irrespective of the pandemic, he has been a constant support and motivational force to the team of ICS. 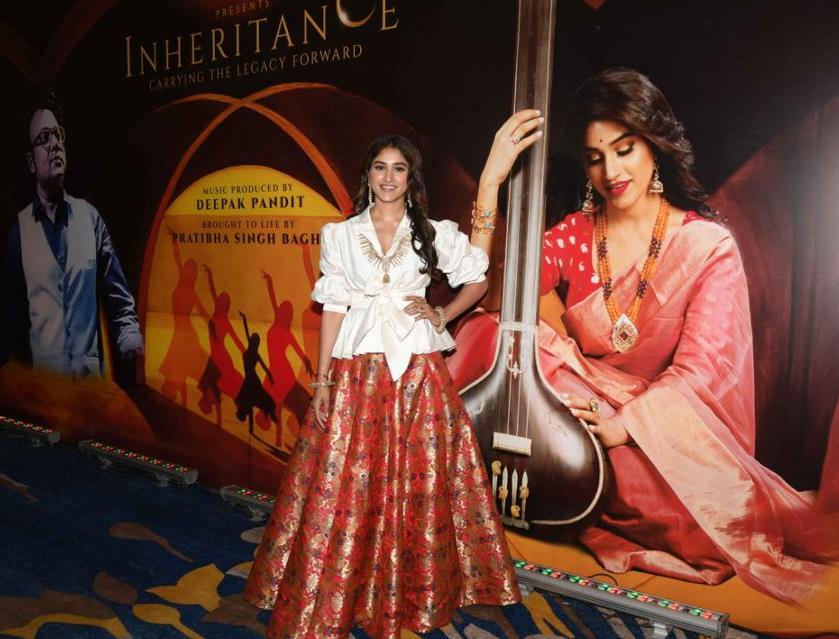 Through her singing potential and interest in acting, she got a significant role of BAHAAR in the most epic musical play “Mughal -E-Azam” and received the appreciation worldwide. Similarly, a theatrical musical play based on a very famous novel “Umrao Jaan Ada”, Pratibha Singh is playing a lead role of “Umrao Jaan” adapted by maestro duo music director, Salim-Suleman.

Chedkhaniyaan is a playback song in web series composed by maestros Shankar Ehsaan Loy from a musically enriched series named Bandish Bandits. Moreover, she won the “Lata MangeshkarAlankaran Award” in 2008. National Classical Vocal award remains one of her most acknowledged awards.

Pratibha Singh will be accompanied by the Playback and Ghazal singer Prithvi Gandharv. Prithvi Gandharv is a swiftly grown talent of India who has been known for being a musical treat and loved all over the world. He has been a part of many famous albums, movies, and songs including the major hits like; Bajirao Mastani, another exceptional song; 'Albela Sajan', many rendering songs from Sarbjit and the list of his songs sung in the movies goes on.

Prithvi Gandharv had sung a duet number ‘Thodi Thodi Behki Si Chaal Hai’ in the movie "Journey of Bhangover" (2017).  Other songs including "Boyega" from My Oho and “Jogi De Naal”, “Ishq Ibadat" with Richa Sharma. He has also been a Composer and Singer for the biopic of Anna Hazare.

Urdu Poetry is a genre which he excelled, giving him an opportunity to compose a Ghazal for Ustad Rashid Khan named “Jazbaa” & "Woh Dekhna Bhi Jo" and part of Ghazal festival Khazana '2018.

Socially, many YouTube labels like Kukki Originals, Sufi Score, and “Bazm-e-Khas” have recorded Prithvi for additional Ghazals. Prithvi is a soulful Singer who will enlighten your evening with positivity and his sheer talent.

So, join us for a profound evening on Friday, 27th May at 7pm, Dr. Kamil Al Rays Auditorium, American International School near the Police station Maidan Hawally Kuwait. For more information call or WhatsApp on the following numbers: